Prostitutes in the city of Geneva have formed the country’s first sex workers’ union, citing foreign competition and the high cost of rent in Switzerland as reasons for needing to unionise.

Sex workers’ unions already exist in many European countries, including Germany and the Netherlands. Despite having some of the most liberal prostitution laws in the world, Switzerland has never before been home to a formal union for sex workers.

The new union, which has formally called itself the Sex Workers’ Syndicate (STTS) and is based in the Pâquis neighborhood of Geneva, aims to operate alongside the organisation Aspasie, which has advocated for prostitutes in Geneva since 1982.

Aspasie primarily concerns itself with the health and well-being of sex workers, while STTS was mainly founded to address prostitutes’ financial concerns and working conditions.

It is understood that some 80 sex workers attended the union’s first meeting this week.

The Trade Union Federation says it would consider admitting the new sex workers’ union to its organisation in the future if the union so desired, pending certain conditions.

“We could imagine that the new prostitutes’ trade union could eventually become a member,” a spokesperson told swissinfo.ch.

“However, we have not had any conversations about it and nothing is concrete. If they wanted to become members, it would be important that they share our political views, but they have not yet asked to be included.”

Switzerland has long been criticised by the international community for allowing prostitution by teens as young as 16.

The government has proposed changes to the criminal code which would make it a crime to hire or sell the services of a prostitute who is younger than 18. The change would bring Switzerland in line with its obligations under a Council of Europe convention it signed in 2010 that requires signatories to implement such a ban.

Under the proposed change, which has not yet gone into effect, young sex workers would not be prosecuted for their actions – only those who seek or sell their services would be held responsible.

In some cantons, including Geneva, prostitution under the age of 18 is already illegal.

Having sex with someone under 16 is currently punishable by up to five years in prison.

The legal age for prostitution in France and Italy is 18.

In Switzerland pimping is illegal and uncommon: most prostitutes operate independently out of massage parlours or small studios via mobile phones. They cannot display their wares.

Human trafficking in persons can carry a prison sentence of up to 20 years and coercing a person into prostitution is punishable with up to ten years in prison.

L permits were created in 1975 and allow women from countries that do not have a free labour accord with Switzerland to work as dancers in cabaret clubs for up to eight months.

While Italy’s prime minister Silvio Berlusconi is facing trial for paying for sex with an underage girl, youth prostitution is still tolerated in ...

The sex trade is evident in some parts of Zurich, so much so that the city may erect “sex boxes” where streetwalkers can do their business more ... 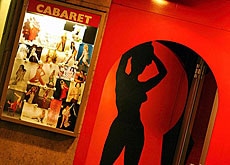 The number of prostitutes and sex clubs has risen over the past few years, but the industry has become more violent, says a federal police ...

Street life Residents complain about sex workers on the street

In many Swiss cities more and more prostitutes work on the street. Under the free movement agreement many come from eastern European countries on ...