Swiss non-governmental organisation BioVision is continuing to help farmers in Kenya, despite the challenges posed by the unrest in the country earlier this year.

On a visit to Zurich, Peter Baumgartner, who runs a BioVision-financed newspaper for smallholders, said it was now even more vital to help this neglected but important part of Kenyan society.

Around 1,500 people died and 600,000 people were displaced during the violence which followed disputed elections in Kenya in December.

A power-sharing deal between President Mwai Kibaki and opposition leader Raila Odinga was signed at the end of February.

Baumgartner, a former Africa correspondent for the Swiss Tages-Anzeiger newspaper, told swissinfo earlier this week that the situation had now quietened down.

"People are very happy to have a feeling of security, more than they had in January and February," he said earlier this week.

Baumgartner has been editing The Organic Farmer since it was created three years ago. The monthly English-language publication gives practical tips on sustainable agriculture to farmers across Kenya.

Up to 80 per cent of the population lives directly or indirectly from farming. Most are subsistence-level smallholders.

Chemical fertilisers have doubled in price in the past two months, says Baumgartner, so for many they are not a viable option.

"But you need an alternative because the farmer has to get a harvest otherwise he will die of hunger," he said.

The March edition, for example, includes advice on malaria, mastitis in cattle and recommends cowpeas as healthy livestock fodder.

The publication, distributed to a network of farmers' groups, reaches an estimated 100,000 people. Baumgartner says it has a social function as well. Copies are shared, so people come together to discuss farming issues.

Women, who often have little access to educational opportunities but play a central role in nourishing the family, can acquire extra knowledge, he adds.

The March issue also deals with the fallout from the unrest. Its cover article highlights how middlemen have taken advantage of the turmoil to hike up food prices.

Its editorial goes on to raise concerns that farmers could be faced with famine as stored food was destroyed, and displaced people may not be resettled in time to start planting.

"Our farmers were affected by the unrest, some were killed, many lost their houses, and more have been expelled to other places," said Baumgartner.

When the unrest started The Organic Farmer postponed the delivery of its January issue as postal services were suspended in the conflict areas.

"But we got a lot of phone calls from farmers saying, 'Hey guys where is your newspaper? Don't let us hang now'," Baumgartner said.

The team called around to find out how best to deliver the journal. "We had to show them that were behind them," said the Swiss.

Smallholders suffer from a low reputation in Kenya compared with people with regular incomes, he explained, and are often ignored.

Baumgartner says it will take time to convert people fully to organic methods and issues such as soil erosion also need to be addressed. But he believes that the newspaper is an important service.

"Sometimes you are frustrated, you spend a lot of time on the newspaper, you see people suffering, and at the same time you see the top shots in Kenya taking the money," he told swissinfo.

"On the other hand, when I go to the farmers' groups... and we see they have done the compost or are taking care of the cows as we have proposed, it's a good feeling, you can say to yourself, we contribute a little bit to the development of this country."

Founded in 1998 by Hans Rudolf Herren, Zurich-based BioVision is a nonprofit, apolitical and denominationally independent Swiss foundation for sustainable development.

BioVision favours scientifically founded methods for the sustainable improvement of living conditions in East Africa, as well as in the fight against poverty.

In addition, BioVision has just launched infonet, an online platform featuring recent, scientifically-based and region specific information on sustainable methods for the prevention and control of pests and vectors that are harmful to humans, animals and plants.

President Mwai Kibaki was declared the winner of December's elections but supporters of his main challenger, Raila Odinga, disputed the results.

Violence – also fanned by old ethnic and economic tensions – subsequently erupted, centred on the Rift Valley. Around 1,500 died and 600,000 people were displaced during the unrest.

Odinga signed a power-sharing deal with Kibaki at the end of February 2008 after talks mediated by former United Nations Secretary-General, Kofi Annan. 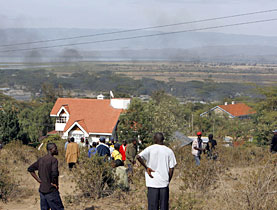 The violence that erupted following disputed national elections in Kenya is rooted in animosities dating back to the colonial era, says a Swiss ... 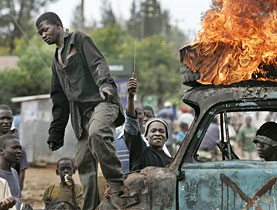 The escalating violence in Kenya is complicating the work of humanitarian agencies operating in the East African country. The Swiss-run ...