Max Keller was the director of the Palace Hotel in the Swiss resort of St Moritz – playground of the rich and beautiful – for ten years.

He has written a book telling of his time among the "snowciety" in the 1980s, which included former Fiat boss Gianni Agnelli and the Greek Niarchos dynasty.

"Via St Moritz to Hong Kong and Back" is a collection of stories and anecdotes gathered during Keller's time as director of several top class luxury hotels around the globe.

The Swiss was born near Lake Constance. As a child he was fascinated by his mother's stories of being a governess to the managing director of the luxury Brown's hotel in London.

However, Keller's father was not so enamoured of his son's plans to go into the hotel industry, so Keller junior had to agree to train for three years as a chef before he could join the renowned Hotel School in Lausanne.

Upon graduating he immediately set his sights high – the Baur au Lac hotel in Zurich. He worked his way further up the ladder with stints at the Palace Hotel in Gstaad, the Palace Hotel in St Moritz, and the exclusive Hôtel du Cap d'Antibes – Edec Roc on the French Riviera.

He first big break was the vice director's post at the Peninsula Hotel in colonial-era Hong Kong.

One special visitor to the hotel in the 1970s was Imelda Marcos. The wife of the then Philippines president may be famed for her enormous shoe collection, but Keller reveals that she liked to travel in big style as well.

No fewer than 25 Blue Ladies, or ladies in waiting, as well as countless bodyguards were needed to accompany the Iron Butterfly on her shopping trips. She would often reserve entire hotel floors – often at the last minute.

"Looking back it was so preposterous and crazy," Keller said. "When she stayed I usually had three hours sleep a day because she always got up at the end of my working day between eight and ten then it would start with whatever she wanted."

After three years Keller got a call offering him the directorship of the Palace Hotel in St Moritz.

"An Englishman, a very good friend in the trade, said to me about my appointment, 'Max I'm very happy for you, but you have to know that from now on you can only go sideways or down'".

The 1980s were still a time of glitz, glamour and parties – the Aga Khan, Alfred Hitchcock and King Juan Carlos of Spain were all guests during this era.

"What fascinated me was that I was dealing with the war generation. Nowadays you have a generation of people who have never seen anything but prosperity and wellbeing and that doesn't make characters," Keller explained.

Keller said sometimes toughness was needed towards rich guests who could be arrogant, snobby and pushy.

He tells of how he plucked up the courage to bar one of the rowdy sons of Stavros Niarchos, of the super-wealthy Greek shipping dynasty. This was accepted by the family, earning him respect in St Moritz society.

But it was important not to get carried away. "You are always with the scene, but you are never part of it as a director," said Keller, adding that this gave him the necessary distance to write the book.

After resigning from the palace job, he had a disappointing experience at an establishment in Vienna, "what my friend said, sideways or down", before leaving the industry altogether.

Nowadays he divides his time between Denmark – his wife is Danish - and Winterthur, where he is treasurer in his brother's company. Being away from the hotel industry has made him realise there are other sides to life, he says.

"I'm happy to be out of the hotel business," Keller said. "It was fun but it was all absorbing."

"Via St. Moritz nach Hong Kong und zurück" (Via St Moritz to Hong Kong and back) is published in German by the Swiss publishers Verlag Neue Zürcher Zeitung. It has been a success and is on its third edition.

An English version of the text exists, but Keller has not yet found a publisher. 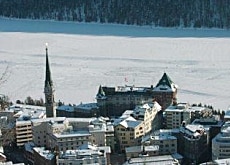 Every day in winter private jets roar into the high-altitude airport in the Upper Engadine, bringing the rich and famous to St Moritz. When it ...

The exclusive mountain resort of St Moritz has unveiled details of its licensing agreement with a luxury property development in the Chinese city ...

The jet-set Swiss resort of St Moritz is famous for its skiing and Cresta Run, but the frozen lake is also the unlikely venue for an annual winter ...