A proposal to restrict access to firearms appears to have support particularly among women, according to an opinion poll six weeks before a nationwide vote.

The survey comes as the campaign by supporters and opponents of the anti-gun initiative gathers pace, fuelled by posters with a highly emotional appeal.


The poll, carried out by the leading gfs.bern research and polling institute on behalf of the Swiss Broadcasting Corporation, found that supporters appear to have the upper hand at the moment with 52 per cent.

“But the outcome of the vote on February 13 remains open,” cautioned Claude Longchamp who heads the institute.

He says he expects opponents of the initiative to step up their efforts now hoping to mobilise their grassroots and convince voters with no clear party-political affiliation.

Longchamp adds that unforeseen events – such as a gun rampage in the United States – could have an impact.

“The dynamics of the campaign will decide,” he explained.

The survey shows a striking difference in perception of the initiative between male and female citizens, according to Longchamp.

“Many women believe that it is unnecessary to keep a firearm at home nowadays, whereas men typically fear for cherished Swiss traditions and therefore tend to oppose the initiative,” he said.

The 24 per cent margin between the sexes is the highest discrepancy recorded in a decade of vote research by his institute, says Longchamp.

He points out that women voters made the crucial difference in nationwide ballots in the past when they were the key factor in assuring a majority for an initiative on tougher punishment of paedophiles in 2008.

At this point in the campaign Longchamp also found that supporters of centre-left parties clearly favour the anti-gun move, whereas the rightwing is as clearly against and the centre-right is divided.

A poll by a rival institute found similar figures, following a survey at the beginning of the month – 45 per cent for, 39 per cent against.

The biggest difference between the two polls is the number of undecided citizens. Twenty-one per cent for Isobublic, but only nine per cent for the institute of Longchamp.

The gap is attributed to different polling methods, according to political scientist Longchamp.

Officially launched before the festive season the campaign has only begun to pick up in the new year. Committees for and against the initiative have been presenting their case in quick succession and revealing their campaign posters.

Supporters use the image of a bleeding teddy bear with gun wound, a cross-party committee of opponents uses that of a crushed paper lantern traditionally used for Swiss National Day and a rightwing committee once again plays on the theme of criminal foreigners showing a man with dark glasses and cigarette pointing a gun straight at the viewer.

A newspaper last Sunday also portrayed a number of parliamentarians – some proudly displaying their automatic rifle – or making a statement to the effect that guns should be stored in an arsenal.

Not unusual for political campaigns is that both sides have been arguing over statistics – the number of suicides through gunshot wounds, and the funds invested particularly by rifle associations in the campaign.

Political scientist Longchamp points out that an unprecedented number of groups and organisations have publicly taken a stance on the initiative.

“It is through these groups that the topic is given an emotional dimension,” he said.

The poll was carried out among 1,214 citizens in all language regions of the country between Jan 3 and 8.

52% of respondents came out in favour, or probably in favour, 39% (probably) against and 9% were undecided.

The survey, the first of two ahead of February 13, was commissioned by the Swiss Broadcasting Corporation, swissinfo.ch’s parent company.

The initiative was launched by an alliance of more than 70 NGOs and is backed by centre-left political parties.

It also demands the creation of a central register for firearms, instead of a cantonal system.

Centre-left and some centre-right parties are backing the initiative, while a majority in parliament as well as the government have come out against.

Swiss voters will have the final say on the issue on February 13. 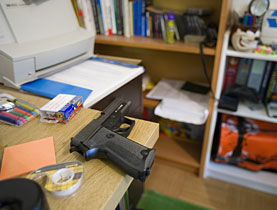