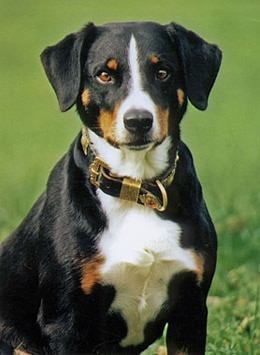 A feisty dog, which doesn't tire easily and is a keen worker, used for herding and guarding cattle. Tough mountain conditions have made this a particularly hardy breed. 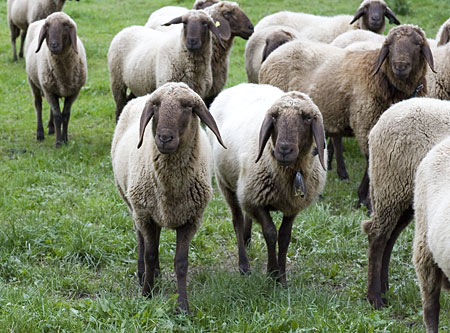 A robust breed, well adapted to the mountains, and extremely fertile. The meat of the lambs is lean and delicate. Their reddish brown wool has given them the nickname "monk sheep" because it is the colour of a monk's habit. 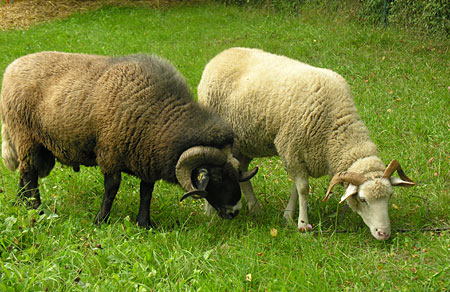 This sheep's roots go back to the "turbary sheep" of the Stone Age. They have a strikingly elegant physique and face. The animals tend to be small, undemanding and robust. 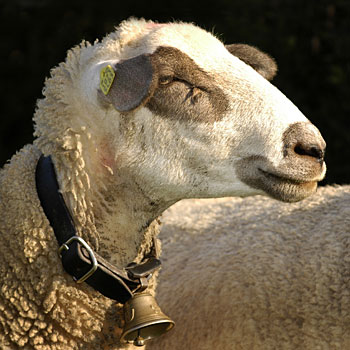 This sheep comes from the Prättigau region of the southeastern canton of Graubünden. It owes its name to its pale, smooth forehead, seen as resembling a mirror. The dark marking around its mouth and eyes - the so-called "spectacles" - make it instantly recognisable. 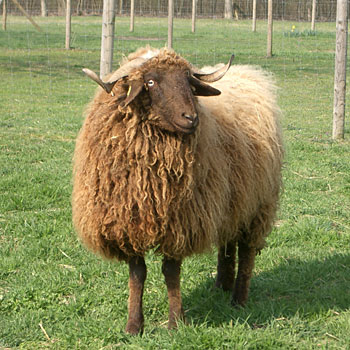 This breed was on the verge of extinction in the 1980s. Its wool was once widely used for making clothes that were greatly appreciated by people suffering from rheumatism. 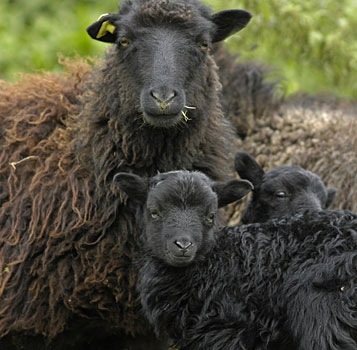 This small heathland sheep came originally from East Prussia and the Baltic states. Its wool is very suitable for making felt. 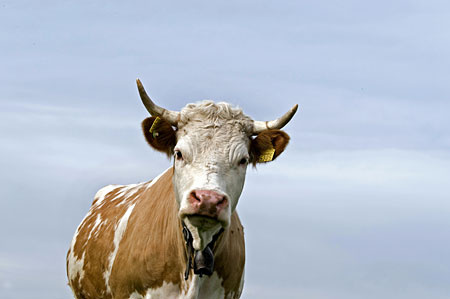 This is the smallest cattle breed in central Europe and survives in the southern Black Forest. The very undemanding animals give an excellent milk yield in proportion to their body weight. They are also notable for the fine texture of their meat. 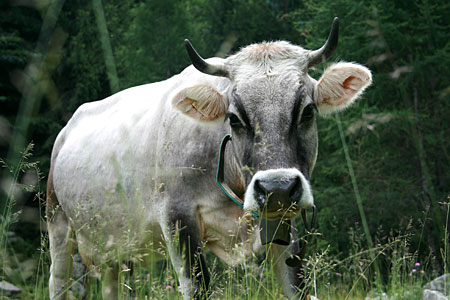 This breed was once found throughout the alpine region, but at the beginning of the 20th century was supplanted by the Swiss Brown and only survived in the neighbouring Tirol. It is undemanding and well adapted to mountain pasturing. Its light weight is good for the ground. Efforts are underway to return it to canton Graubünden. 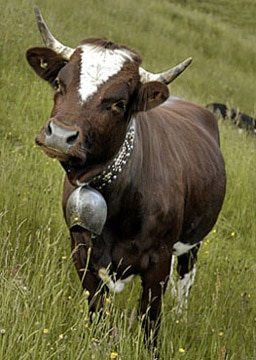 Evolène is a village in the Hérens valley in canton Valais. A small population of these bovines had survived in the side valleys of the Rhône but faced extinction by the early 1990s. Today, they are kept by more than 70 breeders in the Upper Valais and the Bernese Oberland. 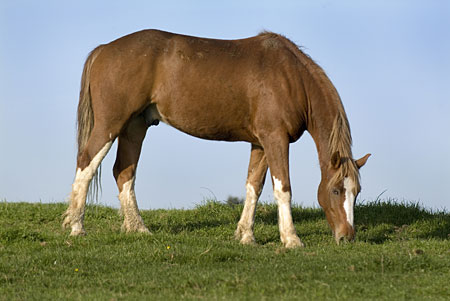 This horse originates in the Swiss Jura area, in particular in the Franches-Montagnes, known as Freiberge in German. A docile and robust breed, it was traditionally used as a draft horse on farms and by the Swiss army. However, the breeding of lighter horses for leisure use is endangering the original. A targeted breeding programme is helping the original population to recover. 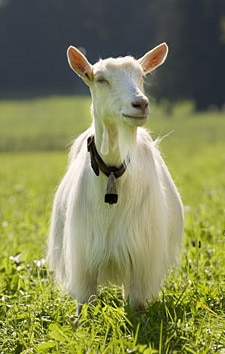 This is an excellent example of a breed with firm cultural roots in the area of its original home. Even today a group of specially decked-out Appenzell goats walks at the head of the cows when they are led up to their summer pasture in Appenzell. 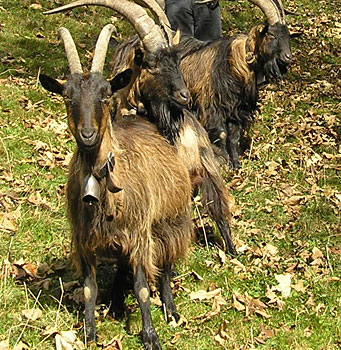 The booted goat (Stiefelgeiss) is a mountain goat from the Oberland area of canton St Gallen and Lake Walen in eastern Switzerland. In the summer they even share their mountain pastures with ibex. 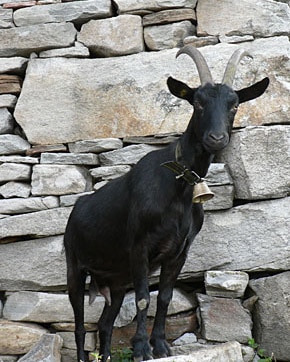 This goat comes from the southern alpine valleys in the southeastern canton of Ticino, such as the Verzasca valley which gave it its name. Its thick wool enables it to withstand the cold and it often stays high up in the mountains until the first snowfall. 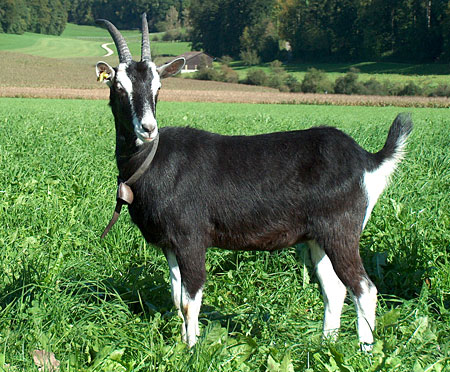 This goat originated in the southeastern canton of Graubünden. It is a very hardy and spirited mountain goat, which is now also bred in the Swiss plateau. It now accounts for five per cent of Switzerland's total goat population. 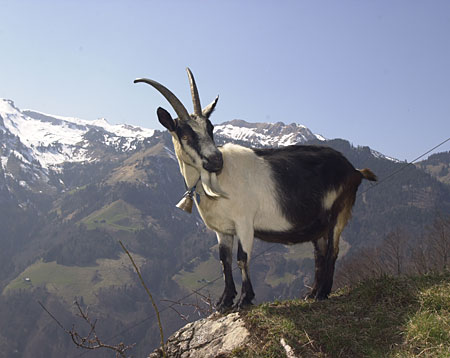 In 1938, when breeds were being purified, this goat was not regarded as worth promoting and was thus more or less condemned to disappear. However, devoted breeders in Graubünden managed to keep the breed alive and it is now widespread throughout Switzerland. 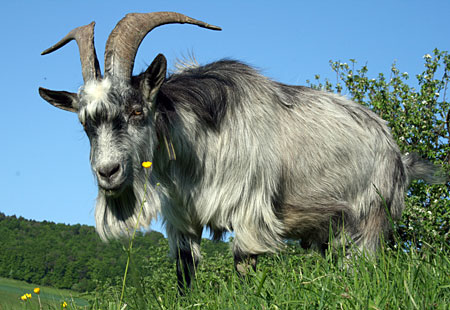 This goat comes from the valleys of southern cantons of Ticino and Graubünden, where its existence has been documented for more than 100 years. The grey of the goat's coat has been compared with the colour of granite. 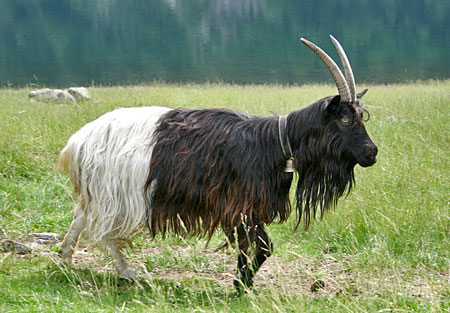 It is said that these goats were brought to the Lower Valais from Africa in 930. They are so attractive that the local tourism authorities like to include them as part of their activities. 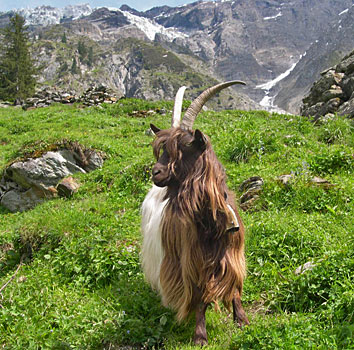 Pro Specie Rara has discovered goats that resemble the Valais Blackneck. The front of the body is not black, but copper-coloured. They may be carrying genes of the long extinct copper goat. Pro Specie Rara has found 15 of these rare animals in Valais and in the Bernese Oberland. 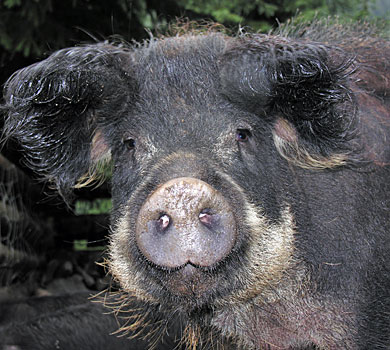 The original home of this woolly pig was the old Austro-Hungarian empire. The excellent quality of their bacon led them to conquer half of Europe in the middle of the 19th century and for a time they were the most commonly kept pig in Switzerland.

Rescuing and protecting endangered animals and plants in Switzerland.

The Pro Specie Rara foundation was established in 1982 with the aim of preserving traditional species and kinds of farm animals, crops, fruit and vegetables to ensure that they do not die out. Here is a selection of the animals which its targeted breeding system is helping to conserve. (All pictures: Pro Specie Rara)