The biggest hoard of celtic silver coins ever found in Switzerland has been unearthed in the village of Füllinsdorf, in the northwestern canton of Basel Country.

Announcing the find on Thursday, the cantonal archaeological department said it consisted of 293 silver coins, found scattered over an area of about 50 square metres only a few centimetres below the surface. However, cantonal archaeologist Reto Marti said they had probably originally been buried together.

The coins are small: about a centimetre across and weighing barely two grams. It is not known what they would have been worth.

It is thought they were buried in about 80-70 B.C., and could have been destined to pay troops. Since there were no banks, it was usual for large sums of money to be hidden in the ground. So far no traces of any settlement have been discovered in the location.

The first coins were found by a private individual “some time ago”, and then the whole area was examined by professional archaeologists.

They are on display in the museum in Liestal until September 23. 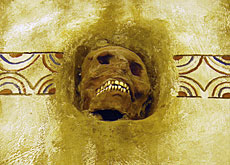 Few ancient peoples are better known than the Celts, but few are also shrouded in such mystery. An exhibition on Celtic religion, which has ... 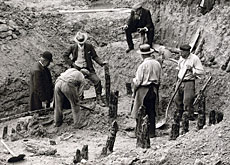 In 1857 Swiss archaeologist Hans Kopp stumbled on a Celtic treasure trove, including 40 iron swords, at La Tène on the northeastern shores of Lake ...

Rediscovering the legend of the lake dwellers

One hundred and fifty years ago, the first settlements of ancient lake-dwelling peoples emerged from Lake Zurich. The discovery gave Europeans a ...