One hundred and fifty years ago, the first settlements of ancient lake-dwelling peoples emerged from Lake Zurich. The discovery gave Europeans a new insight into the lives of their distant ancestors.

This year, around 20 Swiss museums are organising exhibitions dedicated to this significant chapter in Swiss history.

In the winter of 1854, the commune of Meilen took advantage of exceptionally low water levels to start building a harbour on the shore of Lake Zurich.

Quite by chance, the excavations unearthed a number of odd-looking, superbly preserved ancient artefacts, and a series of wooden poles embedded in the mud. The diggers had found a prehistoric lake village.

Ferdinand Keller, a Zurich scholar, put forward a theory that the people here had lived in villages built on platforms above the water which were connected by bridges and walkways.

In subsequent decades, hundreds of lake villages were discovered – especially in the Alpine Arc from France to Slovenia, though similar settlements were also found in several other parts of Europe.

In recent decades, modern scientific analysis and dating techniques have revealed that the villages were rather less exotic than our 19th-century ancestors had believed.

Today, specialists prefer to talk about “lake peoples” who built their settlements at different times from 4300 to 800 BC.

The settlements were actually built on land, usually in marshy areas. At the time, the water level in the lakes was much lower than it is today, and varied from year to year.

Nor were there any platforms. There were only individual, wooden houses standing apart from one another. And the hundreds of poles sunk into the ground date from different periods.

“Even today, however, the Meilen discovery is still considered a watershed for European archaeology,” explains Marc-Antoine Kaeser, curator of the exhibition organised in Zurich by the Swiss National Museum to commemorate the anniversary of the find.

“Until then, the archaeological investigation of prehistory had brought to light almost nothing except symbols of death, such as graves, weapons and military sites. The lake villages and the objects they yielded provided the first evidence that enabled scholars to understand how our ancestors lived.”

Above all, the lake-dweller finds opened up a new historic vision of Switzerland, as it did for other European countries. Suddenly, history no longer began with the Romans.

“The lake settlements demonstrated the existence of skilled, intelligent peoples before the Roman occupation. In short, they gave the people of Switzerland a new consciousness of their own origins,” Marc-Antoine Kaeser points out.

For politicians, more than a century ago, the legend of the lake dwellers was an ideal tool to bind together a still-fragile nation, formed as recently as 1848, and to forge a common identity among Switzerland’s disparate peoples and cultures.

It was no coincidence that in 1867, the Swiss government commissioned the artist Auguste Bachelin to paint a Bronze Age lake village that would represent Switzerland at the Paris Exposition Universelle.

The archaeological success of the lake dwellers had a lot to do with the incredibly high quality of the finds. This is clearly evident from the exhibition at the Swiss National Museum, where 150 objects from Swiss lakes are on display.

Contrary to popular belief, water conserves materials perfectly provided they are kept out of contact with the air. This was the case with the Meilen finds, which were buried under layers of lakeside mud or sand.

“Generally, archaeologists are left with objects made of metal, stone, terracotta or glass from which to interpret the past”, notes Marc-Antoine Kaeser.

“But the lake-dweller finds include various organic materials. There are wooden objects, and even hazelnuts, dried apples, spices or carved resins that help us understand the life and dietary habits of these peoples.”

On the 150th anniversary of the Meilen discovery, Swiss archaeologists are warning that the growing urbanisation of the lakeshore, and above all pollution, are destroying in a few short decades a priceless heritage that had survived for thousands of years.

Countless objects remain hidden under the lakeshore – a literal treasure trove of information about our history.

One question still to be answered is why the lake dwellers choose to live in these muddy, damp environments.

The Zurich exhibition has no answer. But that is not the objective, explains Marc-Antoine Kaeser.

“With the events scheduled this year all around Switzerland, we want to revive the ‘lake-dweller fever’. We want to show that the archaeological reality is just as fascinating as the fictitious worlds that for decades were constructed around the lake peoples ”.

Lake dwellers inhabited Switzerland from 4300 to 800 BC.
The first discovery in Europe of a prehistoric lake village was made in Lake Zurich in 1854.
20 Swiss museums have exhibitions focusing on the lake peoples.

The “Lake Dwellers” exhibition at the Swiss National Museum in Zurich runs until June 13.

The exhibition includes films reconstructing the history and life of the lake peoples, as well as historic documents from the period when the first finds were made at Zurich.

The exhibition also features more than 150 objects found in Swiss lakes over the past century and a half. 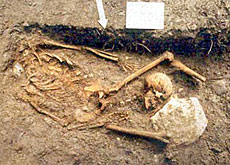 Excavations bring Bern's past to life

Swiss excavation specialists have uncovered an 18th century graveyard during construction work on a new building for the Swiss parliament. They ... 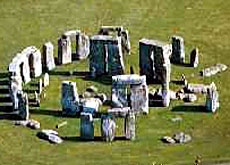 "King" of Stonehenge may have been Swiss

Stonehenge, the 4,000-year-old mysterious ring of ancient stones, which is one of Britain's most famous landmarks, may have a Swiss connection. ...