A debate has been launched about how Switzerland can maintain and expand its road network since the current financing system will soon run out of steam.

Readers of one of Switzerland’s major Sunday newspapers had a shock last weekend: petrol could go up by seven centimes a litre, the headline warned.

The German-language SonntagsZeitung featured an interview with Rudolf Dieterle, head of the Federal Roads Office, which set out the stark choices likely to face the Swiss motorist in the new decade. The fuel price rise he suggested would be equivalent to about 4.5 per cent, on the current price of roughly SFr1.5 ($1.45) a litre.

The problem is that roads have not only to be built, but also to be maintained – and there is simply not enough money. It has to be found somewhere.

The road network is currently financed from the fuel tax, annual road tax licences and the “vignette” which drivers buy every year to allow them to use the motorways.

But the money raised by the tax on petrol no longer goes as far as it did when it was set about ten years ago, and in any case, vehicles are getting more fuel efficient. Hybrid or fully electric vehicles will become increasingly common, but bring in next to no money in fuel tax.

How financing is to be assured is a political decision, Roads Office speaker Thomas Rohrbach told swissinfo.ch. But government, parliament, and voters must ask themselves three questions, he said.

“Do I want to change nothing? That means poorer services at some point. Or am I ready to pay more, and if so, how? Or do I want a completely different system?”

The “completely different system”, raised by Dieterle in his interview, is road pricing, where drivers would pay according to the distance they travel.

“It wouldn’t be in addition to the current system, but you would pay according to what you use,” Rohrbach explained.

He insisted that the Roads Office is simply suggesting mobility pricing as one possibility. “Technically it isn’t a problem,” he said. “We’re not talking about tomorrow. It’ll take time, several years or decades.”

Time enough, he is sure, to solve such problems as how road use would be monitored, how foreign drivers would be billed, and how personal data would be protected.

This form of pricing has the additional advantage that it can act as an incentive tax.

“You could make the price for mobility variable. For example, you pay more at peak times than at off-peak times, to spread out the traffic more,” he said.

Felix Walter, a partner with the Ecoplan Economic Research and Policy Consultancy in Bern, and director of the former "Transport and Environment" national research programme, told swissinfo.ch about the possible impact that mobility pricing would have if it were used as an incentive tax.

At the moment, people are not really aware of what their mobility costs. The bills they receive for vehicle insurance and the road tax do not come at the time they make their journeys.

As an incentive tax, it could affect how people work and where they choose to live. For example, the telephone, video conferences and telecommuting could turn out to be more economic than actually going into the office, he suggested.

As for living, people are likely to start moving back to cities, or to places with good public transport connections, as long commutes become less attractive.

“How great this impact is depends of course on how high road pricing is set. But in general there will be a trend towards re-urbanisation, and reduction in urban sprawl,” Walter said.

He pointed out that the Swiss market economy system means that people pay the full price for what they use.

“It’s important that prices shouldn’t give ecologically wrong incentives. If you drive a long way, and bear only part of the costs, that is a wrong incentive,” he said.

Not everyone is enthusiastic about the idea of road pricing. A government proposal in 2007 to allow cities and urban areas to run pilot projects ran into stiff opposition in parliament from the rightwing and centre-right parties.

Rohrbach denies that the Federal Roads Office is trying to steer the public towards accepting what might currently seem an unpalatable idea. But it is its job to inform the public about the problems it sees. People are currently not well informed about road pricing, he believes.

“We are working on the subject so that if it later becomes politically more topical, then we can at least put some initial answers, or some initial facts, on the table.”

Various European countries and cities have already introduced road pricing in some shape or form.

London and Stockholm use a congestion tax to keep traffic to acceptable levels in their centres.

Germany and Austria charge trucks per every kilometre driven.

The Netherlands plans to introduce a comprehensive system for the entire country starting in 2012.

The report calls for a mobility levy to be raised on all forms of transport, which will both help to steer traffic flows and compensate for the medium-term decrease in fuel tax revenue as vehicles become more efficient.

The report says the state of the infrastructure is "good": the road, rail, air, power, gas and telecommunications networks are reliable, and reach all parts of the country.

However, demand will increase sharply in the next 20 years.

Switzerland must be ready to play an active role as an "infrastructure hub" in the midst of the European Union, the report says.

End of the road for cheap mobility?

Switzerland has too much traffic in too little space, but the transport ministry’s latest proposals to face up to the challenge mean a real change ... 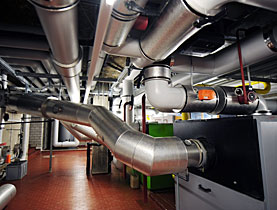 Switzerland will reduce its CO2 emissions without increasing vehicle fuel tax under a government-approved plan to be put to the next session of ... 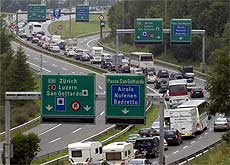 The main Swiss motoring association has come out in support of a proposal to improve Swiss roads to deal with increasing traffic. But ...