swissinfo has spoken to many movers and shakers over the past year, however few personalities are as well recognised as Santa Claus.

Santa Claus: Is it my imagination or are border guards less welcoming this year? I had to answer all sorts of questions on the purpose of my visit: are you fleeing political persecution in Lapland? Have you come here to die? It didn't help of course that they found four IDs on me: Santa Claus, Father Christmas, St Nicholas and Samichlaus. Also had trouble persuading them not to kick out my black reindeer.

I then got a shock over Geneva when I forgot about the Jet d'Eau! Had to make a quick pit stop – Grounding, I think you call it – but fortunately I'd signed a deal with Alinghi for this year's sleigh, so the water wasn't a major problem.

What's more, Schmutzli [St Nicholas's Swiss sidekick] is still getting to grips with the SantaNav so we had to make a small detour via Swaziland...

swissinfo: Schmutzli was on the sleigh? I think you're mixing up your myths, I mean facts.

S.C.: Local solutions to global problems. In the old days of course my role in Switzerland was limited to handing out tangerines and nuts on December 6 with Schmutzli – we were happy to leave December 24 to the Christkindli – but now, what with political and cultural borders disappearing like glaciers, commercial forces mean Swiss children also expect my presence and indeed presents on December 24.

The good news however is that it looks as though I'll soon be able to do some last-minute Sunday shopping in Switzerland. Never had much time for unions – the elves tried to pull that "better working conditions" stunt on me last year. Fortunately direct democracy has yet to reach the North Pole.

swissinfo: It sounds as though you've been following Swiss politics.

S.C.: Anything to make my job easier – plus I have to keep an eye on some favourable financial arrangements I have with the elves of Zurich. I don't spend six months and one day each year in Gstaad for fun.

In fact your economics minister was in the grotto earlier in the year trying to get me to sign a bilateral trade accord. Doris, I said, the Lapp economy is export heavy – always has been, always will be – and frankly the elves get very protectionist when they see "Made in Switzerland".

swissinfo: How are relations between Switzerland and Lapland in general?

S.C.: Frosty. It will be a while before the fallout from the 2006 World Cup qualifying match settles – short legs, elves, but long memories. Do the words toys and formaldehyde jingle any bells?

swissinfo: Getting back into the Christmas spirit, what is your opinion of Swiss children?

S.C.: Children are children, although can I remind parents that my elves speak German, French, Italian and a smattering of Romansh – if kids insist on writing letters in Swiss German, it's not my fault if they get a make-up set instead of an Xbox.

No, adults are the real challenge – and Swiss gun laws are pushing my life insurance through the roof. You try breaking into and creeping round three million households, most of which contain at least one army rifle and ammunition.

S.C.: We recently took the radical step of launching elfBay, an online trading portal. For example under the Swiss "To sell" entries we have: "Tennis racket, rarely used. Martina" and "180 tanks, surplus to requirements. Sämi". Something for everyone.

I saw the potential of the internet from the start, but it's easier to eat nothing but cheese fondue for 30 days than to convince the board of elves to move with the times! The problem is that all seven of them have to agree on a position – and even then the rank-and-file elves can overrule them. It's a miracle anything gets done at all.

swissinfo: You've been coming to Switzerland for centuries. Has anything changed over the years?

S.C.: The temperature for a start. In the old days I used to be able to land on snow in the centre of Bern, now I'm lucky to find a flake below 1,000 metres. And in addition to having to use recyclable packaging, I'm also being pressured to reduce my carbon hoofprints...

Change happens – some days the piste of life is smooth and others it is strewn with moguls – but as I was telling the Tooth Fairy the other day, sometimes you just have to roll up your sleeves and say: "Want to buy a Swiss watch?"

In this interview Santa Claus referred to and sometimes twisted various recent events involving Switzerland. These include:
Tighter immigration laws came into effect on January 1.

The number of "death tourists" taking advantage of Switzerland's liberal laws on assisted suicide increased in 2007.

The rightwing Swiss People's Party's campaign for the elections in October featured a black sheep being booted off the Swiss flag.

The Jet d'Eau is a massive fountain in Lake Geneva which pumps 500 litres of water 140 metres into the air every second.

Alinghi is the Swiss sailing syndicate that has won the past two America's Cups.

In December parliament voted in favour of Sunday shopping.

The "Gnomes of Zurich" is a disparaging term for Swiss bankers, coined in 1964 by British cabinet minister George Brown.

At the end of 2006 seasoned French rocker Johnny Hallyday moved to the Swiss resort of Gstaad for tax reasons.

Doris Leuthard is the economics minister.

In 2005 Switzerland won a crucial football match against Turkey which ended in a physical and diplomatic scuffle.

In August Switzerland recalled 100,000 toys made in China for safety reasons.

All Swiss men have to do military service and keep their guns at home.

In August 2006 Defence Minister Samuel Schmid suspended the sale of 180 tanks to Iraq.

Switzerland's seven cabinet members are obliged to take decisions collectively and then support them, even if they do not personally agree with them. These can then be overturned by people's initiatives. 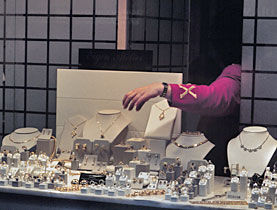 Caviar, perfume and expensive watches – credit cards are getting a record workout in the run-up to Christmas in Switzerland this year. But luxury ... 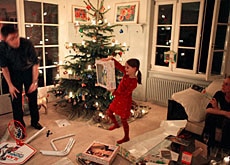 Christmas in Switzerland is an important family ritual and is not considered a time of tension and consumerism, according to a three-year study at ...

Swiss keep in tune at Christmas

Switzerland has a rich and diverse tradition of carol singing at Christmas due to its position at the heart of Europe and its multilingual status.

Europeans worry that America's Santa Claus could usurp the role of their more down-to-earth St Nicholas. With only oranges and nuts for the ...