Semi-paralysed patients and stroke victims all over the world are learning to walk again with the help of a Swiss invention.

The Lokomat walking robot was developed by the Hocoma company, and tested at Balgrist University Hospital in Zurich.

It was the brainchild of electronics engineer and company founder, Gery Colombo, who has scooped two prestigious Swiss business prizes for his invention.

He was awarded the De Vigier Foundation prize in 2001, and named Businessman of the Year 2004 in the start-up category of the Ernst & Young prize.

The hi-tech robot wraps comfortably around patients and helps them to pace on a treadmill.

They are hoisted out of their wheelchairs with a winch, and suspended by parachute type straps.

A brace holds the hips steady, the legs are strapped into the apparatus with velcrose fasteners, and a computer-guided system of weights provides resistance.

Optic sensors support the therapist in the supervision of training, with increased resistance represented in graph form on a computer screen.

Before Lokomat was launched in 2001, it took two therapists to provide assisted training on a treadmill, and it was hard work supporting the patients while manually manipulating their legs.

Colombo recognised the limitations of the manual approach when he started his research into Lokomat 11 years ago. “That’s how I got the idea to build a machine, to do this better,” he told swissinfo.

The Lokomat was introduced at the Physical Therapy Department of
the University of Illinois in the United States two and a half years ago.

The physiotherapist in charge, George Hornby, told swissinfo it had represented a breakthrough in treating patients with spinal injuries.

But he said there were drawbacks. "The patient tends to relax too much.
The speed is limited to 3.2 kilometres per hour, and we walk faster than that. Also, we don't walk like robots on a level plane."

But Hornby added: "I think the next generation of Lokomats with adaptive controls will be better, as they will automatically respond to the patient on the treadmill, increasing or reducing the resistance where necessary."

But there is only hope of recovery if patients are not completely paralysed. Assisted walking sends signals to the central nervous system, teaching unaffected parts of the brain to reinterpret them.

Car crash victim Petra Dokladal, who is 29 and paralysed from the waist down, has no chance of recovery, but still trains regularly on the Lokomat.

“The exercise improves my metabolism and makes me feel pleasantly tired. I also get a kick seeing myself walking when I look in the mirror,” she said.

When Colombo announced his aim of building a walking robot, venture capitalists doubted it was possible. He managed to secure private funding to set up Hocoma in 1996, and within four and a half years, the first prototype was in use.

Physiotherapy was not a field in which hospitals were accustomed to investing large sums of money. Colombo had to convince his clients that staff savings would offset the initial outlay, as it only required one therapist to operate the device.

By 2003, Hocoma was in the black, thanks partly to research funding from the Swiss government’s Commission for Technology and Innovation.

Similar robots are being developed in Germany and the United States, but Hocoma is trying to stay ahead of the competition by further developing Lokomat’s assessment tools.

Unlike its competitors, the Swiss robot can measure the extent to which the patient is participating in the exercise, so that the training strategy can be optimised.

Meanwhile, the company has just launched a new product called ERIGO, which brings patients to a vertical position on a tilting table, at the same time as moving their legs. This induces the same secondary effects as Lokomat - cardio vascular stimulation and prevention of muscle and joint damage - but it is cheaper and requires less effort.

ERIGO was first tested on a coma patient who did not respond to outside stimulus. After three weeks of regular training on the device, Hocoma says the patient was able to control his head, was significantly more alert and able to respond to the therapist.

When ERIGO was launched at a conference of neurologists in October, the response was overwhelming, and customers are queuing up to buy it, the company says.

A Lokomat machine costs SFr200,000-300,000.
In-patients at Balgrist Hospital are allowed to use it whenever they like.
It stimulates the heart, improves the metabolism, and helps prevent muscle and joint damage.
Since its launch in 2001, sales have doubled every year.
40 machines have been sold to hospitals in Europe and North America. 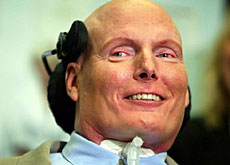 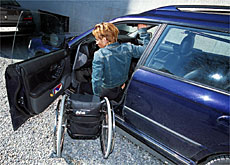 Scientists in Switzerland have successfully regenerated nerve fibres in the damaged spinal cords of monkeys. The result paves the way for human ...

Paralysis sufferers might one day be able to complete simple tasks, such as writing a letter, using brainpower alone. Researchers in Switzerland ...