Swiss tennis superstar and world number one Roger Federer and his wife Mirka have announced the birth of twin girls.

In a statement released on his website and on his Facebook page, Federer said the girls, born on Thursday night, had been named Charlene Riva and Myla Rose.

"I have some exciting news to share with you," Federer's Facebook page said on Friday. "Late last night, in Switzerland, Mirka and I became proud parents of twin girls."

"We named them Myla Rose and Charlene Riva and they are both healthy and along with their mother they are doing great. This is the best day of our lives."

It was the first children for the couple, who were married in April. That they were expecting twins, however, was a well-kept secret, as Federer in previous interviews had always referred to a baby.

The 27-year-old Federer met Mirka Vavrinec when they were competing for Switzerland in the 2000 Sydney Olympic Games.

Mirka, who is 31, was born in Slovakia and emigrated with her family to Switzerland when she was two. After playing on the WTA Tour and retiring prematurely due to injury, she became one of Federer's managers.

Both Federer's website and Facebook pages have been inundated with messages of congratulations from fans around the world. Some were already looking at the tennis potential of the Federer babies.

"Wait 15 to 20 years," wrote one. "The Williams sisters will look like a joke compared with the Federer sisters!"

Indeed British bookmakers Ladbrokes was already offering odds of 100-1 on either of the girls winning Wimbledon, or 25-1 to win a grand slam title.

"The twins certainly come from good tennis stock. If they are half as good as their dad they will still be a potent force on the court," said a Ladbrokes spokesman.

Charlene Riva and Myla Rose are 50-1 to win a slam as part of the same doubles team and 200-1 to take the Wimbledon crown.

"What a great year for Roger! Winning the French (finally!), getting 15 grand slams, and now a father of twin girls," wrote Eve from Switzerland.

"Wishing you all the very best in your family life. Congratulations to you and Mirka on this happy news!"

It has indeed been quite a year for the Basel-born Federer. After finally winning the French Open in his fourth final, Federer became only the third man in the open era (post 1968) to win all four Grand Slam titles, after Rod Laver and Andre Agassi.

The Swiss had lost the three previous finals against four-time champion Rafael Nadal, who was surprisingly beaten in the fourth round.

Federer's Wimbledon triumph, his sixth after having lost to Nadal in the 2008 final, restored him to the top of the world rankings at the expense of his injured Spanish rival.

Which tournaments Federer will now compete during the rest of the summer are still the subject of speculation.

His website still shows him taking part in the Rogers Cup in Montreal on August 10, the Cincinnati Masters on August 17, as well as the US Open at the end of the month.

Some commentators think he might only play in Cincinnati as a warm-up for the US Open, but Federer's plans have not been officially confirmed. Were Federer to forgo Montreal, his number one ranking would not be in any realistic danger.

As to the difference that being a father will make, Federer had this to say in an interview given to Swiss radio just after his Wimbledon victory: "I'm looking forward to a bit of a change because I'm ready for other things and also another rhythm," adding that this would in any case come with the birth of a baby. Or two.

With his win at Wimbledon on July 5. Federer has now become now the third player to win six or more Wimbledon titles after William Renshaw and Pete Sampras both won seven.

And with his 15th grand slam singles title he has broken a tie with Sampras for the most in history.

He also regained his tennis number one spot in the world rankings, after losing the title to Spain's Rafael Nadal in August 2008. Nadal is currently recovering from tendinitis in his right knee. 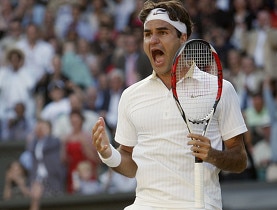 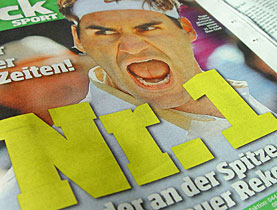 The Swiss press is full of superlatives for Roger Federer, a day after the Swiss tennis ace captured a record-breaking 15th Grand Slam title by ...

Fashionable Federer Is the king of tennis also a style icon?

No one disputes Roger Federer's control of the racket. His dress code, however, has raised a bit of controversy. Some British tennis and gossip ...