Swiss “Jetman” Yves Rossy completed an eight-minute flight along the Grand Canyon on Saturday, one day later than planned and away from the media spotlight.

Details about the flight were announced by Rossy's publicity handlers on Tuesday, after swissinfo.ch reported the successful completion of the stunt by the Swiss daredevil, based on confirmation from two people close to the event.

Flying his jet-propelled wing attached to his back, and steering only by moving his body, Rossy launched from a helicopter at 2,440 metres above the the Grand Canyon, according to his Geneva press office.

Skimming the rockscape at speeds of up to 300km per hour, Jetman sustained flight for more than eight minutes, 60 metres above the rim of Grand Canyon West before deploying his parachute and landing smoothly on the canyon floor.

The flight along one of the United States’ best-known natural wonders had originally been planned for Friday but was postponed because of delays with permission, much to the disappointment of the crowd that had gathered for an eye-level view of Rossy.

"My first flight in the US is sure to be one of the most memorable experiences in my life, not only for the sheer beauty of the Grand Canyon but the honour to fly in sacred Native American lands," Rossy said.

"Thank you Mother Nature and the Hualapai Tribe for making my lifelong dreams come true."

The former Swiss jet fighter pilot flew along portions of the canyon rim in uncontrolled airspace over Guano Point, a region governed by Hualapai Native Americans, about a five-hour drive west of the popular South Rim area of Grand Canyon National Park.

Rossy postponed the flight because of lack of preparation time. “This is a very challenging place,” Rossy said standing on the rim. “Big air currents, steep walls. Without training I don’t want to take the risk of presenting something unprofessional.”

Having no journalist present on Saturday may have helped Rossy to regain some focus. The 52-year-old who lives in canton Vaud had hinted that the pressure of having so many people watch him attempt a difficult flight with no practice had caused him to lose sleep.

The sudden cancellation had left journalists scratching their heads and spectators disappointed at missing the chance to watch the world-record-holder in action.

“I really wanted to see it,” said Donnyell Walker, a Hualapai who had earlier performed traditional “bird” dances with other tribal members to help mark the feat. “I had my hopes up.”

Rossy said he had had no time to practice because the Federal Aviation Administration (FAA) approved his flight only moments before Friday’s scheduled event.

Rossy’s team had not approached the FAA for flight approval. On April 28, the agency wrote to Rossy saying it had only learned of his plans through media reports and that his “rigid deployable device” did not meet certain “airworthiness” requirements.

“We had never been asked to evaluate this type of aircraft, and it doesn't fit neatly into any aircraft category,” Ian Gregor, FAA public affairs manager, told swissinfo.ch.

John Parker, a project manager and liaison between Rossy’s team and the FAA told reporters on Friday that organisers had focused on getting permission from the Hualapai instead of on getting federal certificates of approval.

Rossy, who has flown his four-jet-engine, carbon-kevlar wing over the English Channel, done loop-the-loops from a hot-air balloon, and failed in a bid to fly from Africa to Spain, first suggested the Grand Canyon flight two years ago.

Rossy said he believed he had had the authorisation he needed before leaving Switzerland to pull off his American debut.

Gregor said that whatever authorisation Rossy had, it had not been obtained from the FAA. In Switzerland, Rossy, a professional airline pilot, has certification that applies to him, not his machine. That is not the case in the US, which has rules that govern foreign aircraft in uncontrolled airspace.

To complicate matters, much of the Grand Canyon is protected as a national park, where federal laws forbid aircraft of any sort from dipping below the canyon rim.

Rossy's team approached the Hualapai, which sets many of its own rules, at least on land. The tribe has allowed Hollywood movies to be filmed there as well as a gap-jumping motorcycle stunt by the son of Evel Knieval, Robbie Knieval, in 1999.

"Initially the tribe was cautious with Jetman," said Colin Daviau, director of America's Best Destinations, the tribe's marketing arm. "They get approached by a lot of people who want to do a lot of things and they consider very few of them. Anything that damages the land, they say no."

Once the tribe agreed, the FAA “worked hard with Mr. Rossy and his representatives” to get the flight approved, Gregor said.

FAA documents show that if Rossy wanted to fly at least along the rim—not below it—he’d better do it soon: The permit was only valid for one month, after which time his wing would have likely been subject to additional FAA scrutiny.

Yves "Jetman" Rossy, formerly known as "Fusionman", zoomed into the record books in 2004 by becoming the first person to fly horizontally for four minutes with a jet-propelled wing strapped to his back.

Rossy's transformation from human to jet-man involves putting on a Formula-1 fireproof suit, three parachutes, two for Rossy and one for his wing, a helmet that beeps a warning when he goes too low and his custom two-metre-wide carbon wing, which is strapped to his back and powered by four mini jets. His invention weighs about 55kg with fuel.

The wing, which he conceived, built and fine tuned himself over eight years, has no steering capability so Rossy had to control his movement using his head, shoulders and arms. The only instrument is the fuel throttle.

The Hualapai tribe is one of several groups of Native Americans that live in northern Arizona along the Grand Canyon rim. Today all that remains of the once 800,000-strong nation are about 3,000 members, many of whom live on a 4,000-square-kilometer reservation of parched, desolate land east of Las Vegas, Nevada.

While many Native American nations in the American west build casinos to generate revenue, the Hualapai, or “people of the tall pines”, have resorted to tourism. It is their only business venture. A corporation of Hualapai owners has developed attractions like a glass-bottom lookout perched over the rim and a lodge set along the sweeping views.

This area, called Grand Canyon West, is not part of the National Park Service, which controls the eastern portions of the canyon (Grand Canyon National Park) and sets strict rules on development, recreation and commercial activity. The Hualapai allow aircraft, namely sight-seeing helicopter tours, to dip below the canyon rim whereas federal authorities to the west do not. 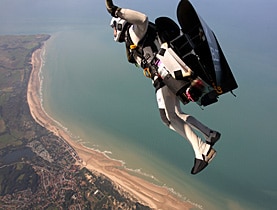 Fusionman – daredevil Swiss pilot Yves Rossy – talks to swissinfo about his new prototype wings, conquering the United States, and why the sky is ... 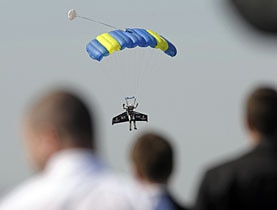 "Fusionman" flies across the English Channel

Is it a bird? Is it a plane? No, it's Fusionman – daredevil Swiss pilot Yves Rossy – who on Friday crossed the English Channel propelled by a ... 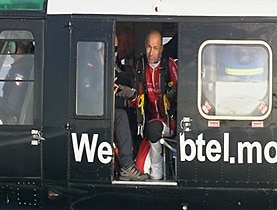 Yves "Fusionman" Rossy tried and failed to make aviation history on Wednesday by flying across the Strait of Gibraltar from North Africa to Europe ...

Fusionman To infinity and beyond

Swiss pilot and engineer Yves Rossy made his first US appearance with a flight across the Grand Canyon. He gained fame using a similar jet-powered ...