The European-American Solar Orbiter probe took off from Florida on Sunday night with a Swiss X-ray telescope on board to study the Sun close up.

The European Space Agency (ESA) probe successfully launched at 11.03pm (local time, Sunday/5.03am Monday, Swiss time) from Cape Canaveral in Florida. It was launched aboard an American rocket as part of a partnership with NASA.

Ten scientific instruments (209 kilos of payload) are packed on the mission, which costs €1.5 billion (CHF1.6 billion). Over the next decade it will study particle-laden storms on the Sun that can cause breakdowns of technological infrastructure on Earth.

After passing through the orbit of Venus and then Mercury, the satellite, whose maximum speed will reach 245,000 km/h, will travel as close as 42 million kilometres from the Sun, or less than a third of the distance between the Sun and Earth.

One of the ten instruments on board is an X-ray telescope called STIX (Spectrometer Telescope for Imaging X-rays), built by the University of Applied Sciences Northwestern Switzerlandexternal link. While experts from seven European countries contributed to STIX, more than half of the costs were covered by Switzerland, making it a Swiss-led project. Other Swiss contributors were the Paul Scherrer Instituteexternal link and industrial partner Almatechexternal link.

STIX will analyse high-energy X-rays, which are only produced at very high temperatures. By combining STIX's results with those of the other instruments, scientists hope to get a very accurate picture of the enormous energy released by the Sun.

Cleaning up space is the mission of a new Swiss start-up, ClearSpace, which will capitalise on technology developed by engineers at the EPFL. 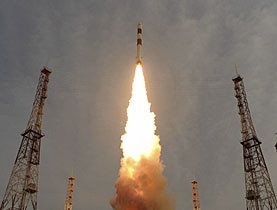 SwissCube, a satellite designed entirely by engineering students, has been successfully launched from a site in India. It is Switzerland's first ...

A nanosatellite developed by Swiss start-up Astrocast was launched into space Monday at a SpaceX rocket launch in California.