The 2003 Alpine World Ski Championships in St Moritz focussed attention on the cradle of winter sports.

One man is given more credit than most for starting it all, and his great-great-grandson has carried the torch into the 21st century.

The 38-year-old, who holds one of the speed records on the icy skeleton track of the Cresta Run, is still a regular on the legendary course and in the dressing room of the St Moritz Tobogganing Club.

He is the only rider to have ever captured the Grand Slam twice, winning each of the four big Cresta races in a single season.

But it was the man he was named after - his great-great-grandfather - who is given credit for developing winter tourism and paving the way for the invention of winter sports.

As legendary as the Cresta Run is the story of how - in the autumn of 1864 - the hotelier Johannes Badrutt made a wager with some of his British guests.

He said he would open his hotel for them in winter if they would make the long journey to St Moritz, and would pay for their return trip if they didn't like the resort at that time of year.

He won the bet and the rest is history. "You must imagine there must have been nothing for them to do except sit in the hotel lobby and talk and drink and God knows what," says the younger Badrutt in the lounge of the family's Palace Hotel.

The Palace, as it is simply known in St Moritz, is still the number one address in the exclusive resort and is very much the winter address for the jet set.

British holidaymakers were given credit for inventing winter sports in St Moritz, as well as in Davos and resorts in the Bernese Oberland; but the development would have been impossible without the support of astute hotel pioneers like Badrutt.

"These English people were probably bored so they started going outside and looking for ways to entertain themselves and they probably discovered tobogganing," says the younger Badrutt.

Competitions were held on what was eventually called the Cresta Run, which was built on property belonging to the Badrutt family, who provided the labour and equipment to build the run free of charge.

Badrutt and his heirs realised they had a vested interest in keeping their guests happy, and today the Cresta Run remains very British and has retained its amateur status.

The St Moritz Tobogganing Club, which owns it, also wants to preserve the links to the past.

For the Badrutts, the sport is as much a family inheritance as the hotel business.

"My father literally demanded from me that I ride the Cresta, which I did, and from the first ride ever I was addicted to it," remembers Badrutt.

The Cresta Run has changed little over the years but Badrutt laments the way St Moritz has altered.

Even though he has yet to turn 40, he remembers when guests would check into the hotel and spend the entire winter.

"I don't like, for instance, that people are coming now for only one or two days just to say they've been here," he says.

"What made St Moritz famous was the people who came and spent a considerable amount of time here. They came year after year, developed long-lasting friendships and started all kinds of winter sports like the Cresta.

"Nowadays the people who come just to say they've been here are not contributing anything anymore, and I think that's a bit sad."

However, the Badrutt family has also changed with the times. The current Johannes Badrutt is the first direct descendant of the old hotelier not to run the hotel.

The family handed over the management to an American hotel conglomerate three years ago, and Badrutt only spends his winters in St Moritz.

However, he says he wants to pass on his family heritage, including the Cresta Run, to his young son.

"He's four and a half years old and I'm going to make sure he rides the Cresta. I've already bought him a little Cresta toboggan and I'm going to start practising with him. It will make me very happy."

Winter tourism was born in St Moritz in 1864.
Tobogganing was one of first winter pastimes developed by British guests.
The first competitions took place between teams from St Moritz and Davos.

Tourists who travelled to St Moritz in winter during the second half of the 19th century developed winter sports as a way of passing the time.

One of the first sports was tobogganing, with races eventually being organised by the British-led St Moritz Tobogganing Club and held on the Cresta Run.

Tobogganing on the Cresta eventually spawned the bobsleigh event. St Moritz's bobsleigh track runs parallel to the Cresta, and like the Cresta, is made of natural ice.

Due to its long history as a winter resort, St Moritz also plays host to numerous other winter sport competitions, some of which have been adapted for snow. They include, horse racing, greyhound racing, polo and cricket.

The two hotels usually associated with St Moritz's early days as a winter resort are Badrutt's Palace and the Kulm. The Kulm was the Badrutt family's first hotel before they acquired the land to build the Palace.

Today, the Palace is still in the Badrutt family hands but the Kulm is owned by the Greek shipping magnate family, Niarchos. The Kulm is home of the office of the St Moritz Tobogganing Club. 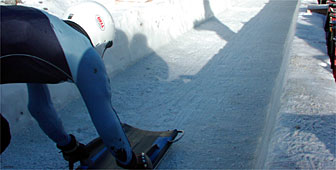 Nuts and bolts of the notorious Cresta Run

The easiest way to recognise a hardened rider of the Cresta Run is to look at his X-ray. Retired Lieutenant-Colonel Digby Willoughby, secretary ...