The rising popularity of winter sports such as snowshoe walking and off-piste skiing is resulting in the growth of wildlife “tranquillity zones” in the Swiss Alps.

The Federal Environment Office and the Swiss Alpine Club (SAC) recently launched an online map that indicates the latest wildlife protected zones to help people who go on ski tours and cross-country hikers on snowshoes to plan fauna-friendly routes.


Like a lynx’s beautiful coat, the new internet map is covered with tiny spots – although these are purple and orange with red lines - representing wildlife tranquillity zones, game reserves and recommended trails in the Swiss mountains.

Thomas Gurtner, in charge of environmental affairs at the Swiss Alpine Club (SAC), described the internet map as a “very useful tool”.

“We have been pushing for this internet platform for years,” Gurtner told swissinfo.ch.

The SAC and Swisstopo publish paper ski touring maps that are updated every six years and they were “not always up to date”.

“We want it to be normal that when you go walking in the mountains in winter you don’t just check the weather or avalanche warnings but you also check the protected zones,” said the SAC official.

He admitted that his job was a balancing act: “We want to promote mountain sports on the one hand and sustainable mountain development and biodiversity on the other.”

Reto Soler, in charge of the “To respect is to protect” alpine awareness campaign launched last year, said the aim was not to stop people having fun in the mountains.

“With this information we allow them to go on the condition that they stick to the boundaries,” he explained. “There has always been an uncertainty for people who go snowshoe walking and ski-touring whether or not they are entering a protected zone and what happens if anyone receives a fine.”

With the growth in visitors to the Alps there has been a parallel development in wildlife safe havens, explained Thomas Gerner, a specialist with the Federal Environment Office.

“There are now nine cantons with a total of 700 protected areas, 41 of which are game reserves, the remainder wildlife tranquillity areas,” he noted.

But there are considerable differences as to how the protective measures are implemented and how violations of the rules are treated in different regions of the country. Some regional authorities, such as in Graubünden, have enshrined tranquillity zones for animals in cantonal law with fines that can range from SFr100-1,500 ($104-1,553).

But cantons Fribourg, Vaud, Appenzell Inner-Rhodes and Outer-Rhodes and Glarus are also looking into creating wildlife tranquillity zones, he added. The authorities hope that in the next two to five years all cantons will have created wildlife havenswherever intensive use for outdoor activities require such a measure.

The new internet site is the latest stage in the long-term awareness campaign which has brought together the federal authorities, environmental groups and the tourism and transport sectors.

“There has been a growth in mountain sports and everyone is out in nature but this leads to problems and the fauna is definitely suffering. This is why we need to be able to control things early on,” said Gurtner.

According to specialists, sales of snowshoes in Switzerland have rocketed. Over the past eight years it has soared from just 3,000 pairs to 80,000, and with a maximum growth potential of 250,000. Ski touring is also continuing to grow in popularity.

Andrea Haslinger from Pro Natura also thinks animals are being increasingly disturbed: “If you stick to the trails the effect on them is not huge as they get used to you. But snowshoes are problematic as people walk in forests during the day and at night, and they walk anywhere.”

The instinctive reaction of an animal is to flee when approached by a human. It requires a lot of physical energy to run away through high snow and freezing temperatures, she noted. Added to this is food scarcity and often there is not enough time to rest because of the stress.

Wild animals cannot cope with too many interruptions over a short period of time. They do not recover sufficiently and fail to reproduce after a hard winter, or they may starve to death or else die as a result of exhaustion.

And off-piste skiing also has a clear impact on the mortality rate of chamois, Catherine Martinson, from WWF Switzerland, told Le Temps newspaper.

“We know that in the Verbier region, chamois disturbed by skiers seek refuge in avalanche zones and fall into narrow gullies,” she said.

In 2009 the Federal Environment Office and the Swiss Alpine Club launched a campaign to draw attention to the needs wildlife animals during the winter season.

The “Respecter, c’est protéger” campaign appeals to people to respect the following four rules: To keep out of specially marked zones for animals; to keep to the footpaths in the forests so animals have a chance to get used to humans; to stay clear of snow-free spots near the edges of forests and to put dogs on a leash when walking through the wintry countryside.

A 2007 study by Bern University, in cooperation with Vienna University and the Swiss Ornithological Institute, quantified the physiological effects of winter sports on wild animals, such as the black grouse. It showed that sensitive birds are suffering dangerous amounts of stress and concluded that in the long term only the installation of winter protection areas can help the animals counter the increasing pressure of human activity on their ecosystems.

The Federal Environment Office is pushing cantons to define protected zones ahead of the revision of the federal hunting law, which should be discussed in parliament the middle of next year.

To date nine cantons have created a total of 700 protected zones, 41 of which are game preserves, the remainder wildlife tranquillity zones. They are: Basel Country, Bern, Graubunden, Nidwalden, Obwalden, St Gallen, Schwyz, Uri and Valais. But cantons Fribourg, Vaud, Appenzell Inner-Rhodes and Outer-Rhodes and Glarus are also looking into creating wildlife tranquillity zones. 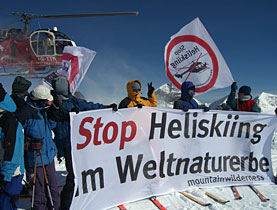 The Unesco-protected Aletsch glacier region and other high mountain areas are increasingly plagued by noise pollution caused by heliskiing, say ... 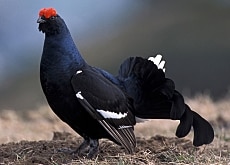 Trendy winter sports in the Alps are threatening the survival of wild animals, according to a study led by scientists from Bern University. In ... 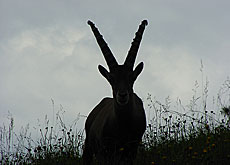 Winter has Switzerland - and most of Europe - in its icy grip. Heavy snowfall brings joy to skiers and children, but chaos to traffic and ...

Geared up for danger More avalanches, but off-piste skiers are also better equipped

Ski mountaineering - or backcountry skiing - is in vogue. More and more skiers and snowboarders look for new challenges, away from the pistes.

Heavy snowfall this winter has attracted record numbers of tourists to Swiss ski resorts, but also caused a few headaches for ski instructors and ...