A leading political party is calling for Switzerland’s conscript army to be scrapped.

The centre-left Social Democrats want to see the armed forces cut from 220,000 to 50,000 and more emphasis placed on peacekeeping missions abroad.

The Social Democrats said a force comprising 12,000 professional soldiers and 38,000 volunteers would be sufficient to maintain Switzerland’s security.

Under the Swiss constitution, every able-bodied man has to serve in the army. More than 20,000 conscripts pass through recruit school every year.

The proposal comes in response to a cabinet announcement earlier this month to restructure the armed forces but maintain current troop levels.

The Social Democrats said on Friday that it made no sense to keep a large militia army under the latest reform plans, which parliament is due to discuss at a later stage.

Instead, the party wants the armed forces to focus on peacekeeping duties under the auspices of the United Nations, the Organisation for Security and Cooperation in Europe, the European Union and Nato’s Partnership for Peace programme.

The Social Democrats say it is time to abandon the long-standing concept that the raison d’être of the armed forces is to defend Swiss soil.

The new system would allow a reduction of annual costs from SFr4 billion ($3.2 billion) to less than SFr2.5 billion, according Social Democrat parliamentarian Barbara Haering.

The party also rejected the increasing use of the armed forces to support police in providing security at major events such as the annual meeting of the World Economic Forum (WEF) in Davos, and at diplomatic missions.

Switzerland is not a member of Nato, but it joined Nato’s Partnership for Peace Programme in 1996.

In 1989 Swiss voters rejected a proposal to abolish the army, but pacifists and leftwing groups were supported by around a third of voters.

Under reform plans introduced in 2004, Switzerland’s conscript army was cut from 360,000 troops to 220,000, which includes 80,000 reservists and 20,000 recruits.
Swiss voters approved the reform in a nationwide vote in 2003.
Every able-bodied Swiss man has to do between 18-21 weeks of basic training at the age of 20 and regular refresher courses.

French-speaking Switzerland is distinctly less keen on conscription than the German-speaking majority, a survey has revealed. The principle of ... 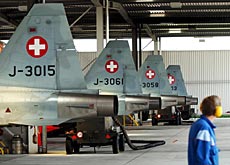 The Swiss defence ministry says it plans to close 25 military sites, including four airbases. The cuts are part of a series of planned measures ...