Young people are finding it easier to get hold of alcohol in Switzerland. Last year underage volunteers were sold beer, wine or spirits in a third of test purchases, according to the Swiss Alcohol Board, up from a quarter in 2013.

One reason for this – the highest level since 2008 – is that more test purchase were carried out in the evening.

During the day, the young people were asked for ID four times out of five; in the evening, fewer than half were, the alcohol board said on Friday.

Almost one in five of the young buyers were not even asked for their ID. The legal drinking age (16 for wine and beer, 18 for spirits, liqueurs, cocktails and alcopops).

However, some places enforce the law more than others. In petrol stations only a sixth of test buyers were successful. In bars and shops licensed to sell alcohol one in two was. In restaurants, 44% were served alcohol.

The Swiss Alcohol Board said in 2014 it was more than twice as easy to buy alcohol in places where it is consumed immediately than bought to take away.

Using this information, the board said it planned to raise awareness and training among sales staff.

Last year more than 5,000 test purchases were carried out.

Although it’s become more difficult for minors to buy alcoholic beverages in Switzerland, one in four underage clients still succeeds in buying ... 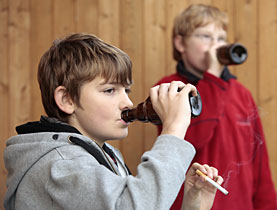 Alcohol consumption among Swiss youth continues to be a major health risk and should not be underestimated, experts say, despite a decline in ...

Binge-drinking is falling out of fashion among young people in Switzerland and alcohol dependency is diagnosed less frequently. Experts point out, ...

Excessive alcohol consumption is not only bad for one’s health, it also puts a strain on companies and the economy in general. In Switzerland, the ...