Roger Federer's announcement that he has split from part-time coach Tony Roche has taken the world of tennis by surprise.

But René Stauffer, a sports journalist and author of "Quest for perfection: The Roger Federer Story", tells swissinfo why this decision might actually be a blessing in disguise for the Swiss tennis star.

Federer, world number one since February 2004, published the news on his website on Saturday, saying he and 62-year-old Roche had mutually decided to end their arrangement.

The move leaves Federer without a coach two weeks before the French Open, the only Grand Slam tournament he hasn't won and a title he has described as his "main goal".

"I was pretty surprised – no one expected it – but when we try to find the reasons it's pretty obvious that there was a disturbance for Roger in this collaboration," explained Stauffer.

"Why that came no one knows – neither Federer nor Roche has spoken – but it's obvious that there was a problem and some people [within tennis] have told me that the decision was overdue."

Federer brought Roche aboard before the 2005 Australian Open, working with him in Sydney for two weeks. At the time Federer said: "I hope he can improve my game just a little bit. I like the way I'm playing right now. If he can improve just a few things in my game, that will be good."

On paper it was a fairly successful relationship, as during this period the Swiss star won six of his ten grand slam titles.

"If you look at Roger's game, it's obvious that he tried to come in [to net] more and he has improved his volleys – Roche himself was one of the finest volleyers ever. Roche is also a leftie [lefthander] which surely helped Roger understand the things that go on when you play a leftie – Nadal is a leftie," said Stauffer.

"But if you look at the big picture, you'd have to say that Roche failed to lead Roger to the French Open title, which was the main goal, the only big tournament that Roger hasn't won so far."

Beginning of the end?

Roche was with Federer last week at the Rome Masters, where he was upset in the third round by Filippo Volandri, ranked 53rd in the world. That loss meant Federer has played in four consecutive tournaments without winning a title, his longest such drought since he became number one.

"I don't know what's wrong. I have to analyse it myself," Federer said after the defeat in Rome.

But Stauffer feels that it is far too early to talk about the end of a Federer era.

"When Paris and Wimbledon are behind us then you would have to [look at the situation]. If he doesn't win one of them, then you could start to talk about a crisis and also worry about his number one position."

Stauffer believes the split could even have a liberating impact on Federer.

"It could be that he starts to feel free again and really focus on his tennis – in Rome he didn't seem at all focused on the tennis, it was obvious that something was disturbing him. So maybe that will help him. I think he's just anxious for Paris to begin," he said.

Roche, the 1966 French Open champion, is one of Australia's tennis greats who also has coached top-ranked players Ivan Lendl and Patrick Rafter.

Federer has worked off and on with coaches since his longtime coach Peter Carter died in a car crash in 2002. Federer was coached by Peter Lundgren in 2003, then didn't have a coach at all the next year, when he won 11 titles, including three grand slam events.

"I actually think that Roger was not completely happy with the part-time coaching situation [Roche would only work with Federer for a couple of weeks before major tournaments]. In my opinion he might go back to a full-time coach. I don't think he wants to travel alone again like he did in 2004," Stauffer said.

Federer has yet to equal Pete Sampras's record of 14 grand slam titles - he has ten - the Swiss has many other records under his belt.

Earlier this year Federer beat the record for the longest unbroken reign as world number one, overtaking Jimmy Connors' 30-year-old milestone of 160 weeks. Federer has been in pole position since February 2, 2004.

In April Federer became the first living person to be honoured with a special stamp by the Swiss Post.

1989-1994: Seppli Kacovsky. Czech-born Kacovsky was the head coach of the Tennis Club Old Boys Basel in Federer's home town of Basel.
1991-1995, 1997-1998: Peter Carter. Australian Carter gave Federer weekly private coaching from the age of 10 to 14. They reunited in a new training facility in Biel in 1997 and Carter coached Federer on and off until he turned pro.
1999-2003: Peter Lundgren. When Federer entered the professional circuit, he chose former top-25 player Lundgren, a Swede whom he met in Biel, as his coach. He still consulted with Carter.
2005-May 2007: Tony Roche. The Australian, who won the French Open in 1966, helped Federer for a few weeks before Grand Slam and ATP Masters tournaments. 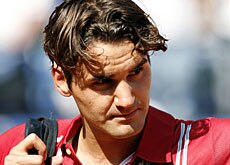 Shock defeat for Federer in Rome

Tennis world number one Roger Federer has lost to Italian wild card Filippo Volandri 6-2, 6-4 in the third round of the Rome Masters. The defeat ... 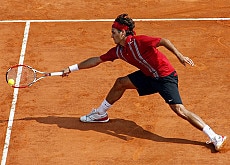 Switzerland's Roger Federer has failed to break Rafael Nadal's winning streak on clay and lost the final of the Monte Carlo tournament on Sunday ... 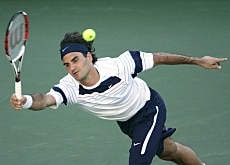 World number one Roger Federer has suffered a shock defeat in the United States, ending his 41-match winning streak stretching back to August last ...