Leading Wall Street brokerages, including the investment arms of Switzerland's two biggest banks, have reached a settlement with US regulators over charges of issuing biased stock research.

While admitting no wrongdoing, the ten companies agreed to pay a total of $1.4 billion (SFr1.9 billion) and change their business practices.

The US Securities and Exchange Commission (SEC) said CSFB had also settled charges of securities fraud in the agreement.

The regulators said it had issued fraudulent research reports that "were not based on principles of fair dealing and good faith and did not provide a sound basis for evaluating facts".

UBSW was criticised for not declaring payments received and made for research in violation of US securities laws.

Under the terms of the settlement, the banks are obliged to supply independent research to investors and to separate research analysts from bankers working on underwriting deals.

Seven of the companies concerned will also pay $80 million towards funding investor education to be provided by government bodies, such as the SEC.

No end in sight

The matter is not expected to be resolved even after the fines have been paid; the firms could still face multimillion-dollar lawsuits from disgruntled private customers.

And the final settlement may not be the end of what was dubbed the worst financial scandal in recent times. Probes into other cases of misconduct are still ongoing.

The New York Attorney General, Eliot Spitzer, said: "There will be further actions against individuals linked to analyst conflicts of interest and other wrongdoing."

The announcement comes days after a CSFB investment banker, Frank Quattrone, was charged in the US with obstructing justice and destroying evidence.

The prosecution alleges Quattrone encouraged his staff to clean out files, while knowing the SEC had asked for documents contained in them.

The announcement of the final terms of the deal coincided with the release of some 3,000 pages of documents, including emails and memoranda requisitioned from the firms in question.

The draft terms of the settlement were initially announced in December 2002.

At the time, Spitzer had said: "The agreement will permanently change the way Wall Street operates."

He added: "Every investor knows that the market involves risk. But what every investor expects and deserves is honest investment advice... that is untainted by conflicts of interest."

The investigations - sparked by the fall of energy giant Enron - discovered that small investors had lost million of dollars after investing in stocks whose value had been falsely boosted by analysts.

The brokerages admitted no wrongdoing, but agreed to pay a total of $1.4 billion (SFr1.9 billion).

They also agreed to change their business practices.

The banks are also obliged to separate research analysts from bankers working on underwriting deals.

A former star investment banker with Credit Suisse First Boston has been charged in the United States with obstructing justice and destruction of ... 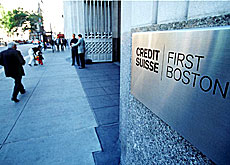