The battle for votes among the country’s four main political parties is hotting up ahead of October's general election.

A planned poster campaign by the rightwing People’s Party depicting the Swiss as “negroes” has sparked controversy amid accusations of racism.

The poster, which was drafted by the party's St Gallen branch, criticises the government’s asylum policy.

Bearing the slogan, “We Swiss are always the Negroes”, the poster shows a man with a ring through his nose wearing a traditional Alpine hat.

Accusing the government of going soft on asylum, crime and naturalisation, the party’s message is: “We’ve had enough”.

However, Aliki Panayides, deputy secretary-general of the Swiss People’s Party, has denied that the campaign is racist.

She told swissinfo that it referred to the fact that many Swiss were being forced to dig deeper into their pockets for less return.

“I hope that people will understand the message that the Swiss are working and paying more for all those who do not work and just come here to take advantage of our system,” she said.

“I’m surprised people are talking about black and white,” she added. “That’s not the point of the message. It’s a traditional Swiss saying that actually means ‘We are being ripped off’.”

However, political adviser Iwan Rickenbacher has warned that the People’s Party could get into trouble over the campaign.

“The slogan is on the verge of being racist. The Swiss People’s Party could face lawsuits for violating Swiss anti-racism law,” said Rickenbacher in a television interview.

Earlier this month an opinion poll showed that with 26 per cent of the vote the People’s Party was currently the most popular political party in Switzerland.

But Paolo Dardanelli, a lecturer in Swiss politics at Britain’s Kent University, thinks the party’s latest campaign could actually damage its popularity.

“If the campaign is launched, I am sure that some of the party’s supporters will be put off,” he said.

“However, I don’t think it will see the light of day considering the controversy it has already sparked,” he said.

Public spending, asylum, health, the economy and the pension reform are the political issues causing most concern to the Swiss electorate.

Other parties are also using the summer season to try to score political points at the expense of their rivals.

On Monday the Social Democratic Party launched a billboard campaign featuring Switzerland’s three founding fathers, each wearing a t-shirt showing the flags of the European Union, the United Nations and Switzerland.

Carrying the message, “Our patriotism is unlimited”, the latest poster is less aggressive than an earlier campaign accusing the economics minister, Joseph Deiss, of not doing enough for the unemployed and demanding his resignation.

But the Christian Democrats were pulling no punches last week when they criticised the transport minister, Moritz Leuenberger, for failing to run his department properly.

The party cited a damning report which revealed that Swiss air safety standards had slipped in recent years.

The report was commissioned in the wake of last year’s mid-air crash over Überlingen in southern Germany, which claimed the lives of 71 people, including 52 schoolchildren.

Some analysts are playing down this latest bout of political skirmishing, arguing that serious electioneering is unlikely to start until after the end of the summer holiday.

“It seems to be the summer of poster campaigns. However, it could also be a sign that we are lacking more important political issues,” said Rickenbacher.

This is a view echoed by Sibylle Hardmeier, a professor of politics at Zurich University.

“It’s still early in the election campaign and it’s holiday season,” she told swissinfo. “Posters are often used to get campaigning off the ground but I’m sure the real issues will be discussed later.”

The People’s Party lead the latest opinion poll with 26 per cent, followed by the Social Democrats (23.4), the Radicals (19) and the Christian Democrats (14.3).
Swiss voters say they are most concerned with public spending, asylum, health, the pension reform and the economy.
The general election is due to take place on October 19. 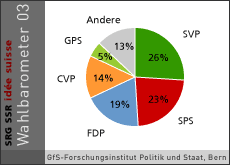 With just 100 days to go before the Swiss parliamentary elections, the rightwing Swiss People’s Party has increased its lead in the opinion polls.