Swiss Post has announced that it will be slashing up to 500 jobs over the next two years as it pushes ahead with a major shake-up, a move unions warn they will fight.

The state-owned company said these changes should allow savings of around SFr50 million ($40 million) each year without affecting basic services.

Swiss Post said that the reason for the changes was the annual deficit made by its network of post offices across the country, estimated at SFr400 million in 2005.

Added to this was the liberalisation of the market, heightened competition and demands from clientele.

The company said that it had been testing different post office models as part of its Ymago restructuring project.

"Our conclusion is that by putting into place a new post office model and adapting the current organisational structure we can improve service to clients and the profitability of the network," said Swiss Post in a statement.

The company insisted this could happen without slimming down post office coverage across the country.

The restructuring will result in a new distribution of services. In the future there will be 200 post offices agencies situated within existing shops, such as village stores, and 200 main post offices that will manage a number of smaller branches.

Swiss Post said it would be working with the unions over the planned job cuts over the next few months.

The changes are due to be put into place by the end of 2008.

But unions have already warned that they will fight the changes. A series of small protests have already taken place in Bern, Lugano and Lausanne.

Transfair, the public service union, on Tuesday harshly criticised the restructuring. The Swiss Communication Union, which also represents postal workers, told a Sunday newspaper that the union would fight the changes and that strike action had not been ruled out.

For its part, the Swiss Business Federation, economiesuisse, said that the reforms did not go far enough and were "modest" compared with what had happened in other countries.

Earlier this year Swiss Post announced it had made a profit of SFr811 million in 2005. In April it underwent a partial liberalisation of its letter delivery service, ending its monopoly.

The Swiss government approved the move as part of steps towards privatising the company and opening the postal market to other licensed competitors.

Swiss Post was established on January 1, 1849 and from the beginning the federal institution was responsible for transporting passengers, letters, parcels and money.

Back then, the railway had barely established itself in Switzerland and the introduction of telegraphy was to take place only a few years later.

Swiss Post has dramatically changed over the years. Today it is a company owned by the Swiss Confederation. It continues to provide a nationwide public service but also engages in competitive business.

Politics continues to exert a substantial influence on the company. The government sets strategic goals for Swiss Post and monitors them every year. 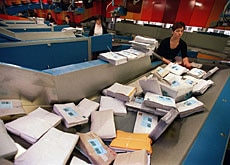 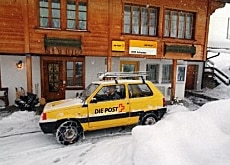 A new report says Swiss living in the countryside continue to have good access to most services, although it is easier to find a restaurant than a ...