Water shortages in the Middle East are so worrying that opposing camps in the region will have little choice but to cooperate, a Swiss-Swedish report warns.

Swiss Foreign Minister Micheline Calmy-Rey on Thursday outlined a new initiative in the region that aims to encourage the sustainable cross-border management of scarce water resources.

"In the future the main geopolitical resource in the Middle East will be water rather than oil," she told reporters in Geneva.

"The report comes to an alarming conclusion: five of the seven countries are experiencing a structural shortage and the debit of most of the big rivers has declined by 50 to 90 per cent since 1960," she said.

The study by the Indian think tank Strategic Foresight Group, funded by Switzerland and Sweden, described the huge depletion of rivers such as the Jordan and Yarmouk over the past 50 years, the diminution of the Euphrates due to drought and the shrinkage of the Dead Sea to a small lake by 2050.

But it also recognised the differences between states, with upstream Turkey in a position to "influence prospects of peace" despite the collapse of a 1980s plan to pipe water to Israel and Gulf states. Downstream territories such as Israel, Jordan and the Palestinian territories were in the worst position, it added.

The 150-page report, which will soon be presented to the European Parliament, also argued that technical solutions such as desalination or wastewater recycling in Israel would ultimately have limited scope.

Purely unilateral solutions will mainly work for a decade or so but Israel will have to look for external sources and regional cooperation beyond 2020 to ensure its water security, the report noted.

“Unless there is a technological breakthrough or a miraculous discovery, the Middle East will not escape a serious shortage,” said Sundeep Waslekar, a researcher from the Strategic Foresight Group.

Switzerland has extensive experience in managing water resources with centres of excellence like the Federal Institute of Technology in Lausanne (EPFL) as well as firms that specialise in filtering, stocking and distribution. It also spends SFr30 million annually on drinking water and irrigation development projects worldwide.

“With our experience we want to help manage the forthcoming crisis,” said Calmy-Rey.

The “Blue Peace” initiative has resulted in a number of recommendations. The most important involves the creation in 2011 of a joint water cooperation council initially limited to Iraq, Jordan, Lebanon, Syria and Turkey. This would ideally lead to joint water management programmes. Swiss diplomats said they had already started to lobby the governments about this.

Another joint water council could also be created by Turkey, Syria and Iraq to manage the river basin of the Euphrates and Tigris.

“Relations between these three countries were poisoned in particular due to water issues. Since 2008 they have signed several regional cooperation agreements in the fields of trade, transport and telecommunications. They can now focus on water,” said Waslekar.

The Swiss foreign minister described the new water initiative as a continuation of the Swiss-backed Geneva Initiative, an unofficial peace accord for the Middle East launched in December 2003, which she says is still not dead.

“It’s about moving forward with talks on the ground between all the actors concerned and of finding a way of overcoming current blockages,” she said.

This new idea is both political and technological, special Swiss envoy to the Middle East Jean-Daniel Ruch, told swissinfo.ch.

“Israel is still technically at war with Lebanon and Syria, and has peace treaties only with Jordan and Egypt. But by showing this strong common interest in water issues, we hope in the long term to create a political commitment for greater cooperation and peace,” he commented.

Water supply is a global concern. A recent United Nations report stated that $80 billion should be invested annually in water infrastructure in developing countries until 2015 and then double the amount until 2025.


(With input from Frédéric Burnand), swissinfo.ch

After a recent skirmish between Israel and Lebanon, the region has found a relative calm. But open discussions between all parties remains a ...

The level of the Dead Sea between Israel and Jordan drops a metre per year, a situation that threatens the ecosystem. A Swiss scientist is trying ...

By Christian Walther in Jerusalem

For years Swiss diplomats have been working to find ways of easing the Israeli blockade of the Gaza Strip and now those efforts could begin to ... 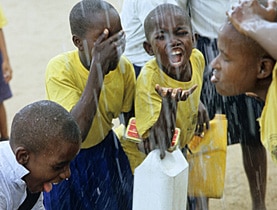 Water set to be the "challenge of the century"

For the Swiss, fresh water means turning on the tap. For someone in Mozambique, however, it could mean a 30-minute walk to a dirty water hole. ...

The UN says 700 million people in 43 countries are affected by water scarcity.

Capturing the human face of climate change. Swiss photographers Mathias Braschler and Monika Fischer travelled to 16 countries across all ...

Urban swimming ...and rafting in the pristine waters of the Aare

You might know Switzerland for its snow-capped mountains, but on a hot summer's day people take to the rivers and lakes to cool down. Take the ...