The Swiss tourist industry has produced new guidelines to better cater for a growing number of Indian visitors attracted by Bollywood's portrayal of the country.

Industry officials highlight Indian cultural, shopping and culinary preferences and dislikes. Indians spent a total of 284,390 nights in Swiss hotels last year, up 14 per cent on 2005.

The report from the Swiss tourist board and the hotel industry, Hotellerie Suisse, hailed India as one of the most important markets and forecast an average 15 per cent increase in the number of visitors from the country every year for the next ten years.

"Together with China, India is the most important market for us in Asia because it has such a big population and a rapidly growing economy," Switzerland Tourism director Jürg Schmid told swissinfo. "That means more Indian tourists can afford to travel to Switzerland."

"Switzerland is a dream destination for many Indians and a must-stop venue on any European tour."

Indian businessman Waseem Hussain, boss of Swiss-based consultancy firm MARWAS AG, was commissioned to help produce the brochure - Swiss Hospitality for Indian Guests - that was presented in Zurich on Wednesday.

He told swissinfo that India's view of Switzerland is heavily coloured by the dozens of romantic Bollywood movies shot in the Alps every year. "Switzerland is a dream destination for honeymooners and group tourists," he said.

"Some of the individual tourists who come to Switzerland know quite a bit about the federal political structure and that it is a multilingual country, but that awareness, while growing, is in its early stages."

Hussain advised Swiss companies doing business with their Indian counterparts to be aware of the strong family roots inherent in most of these firms. He urged Swiss businesses to take the time to develop strong personal ties with Indian bosses.

Cheese off the menu

"If they can be accepted as quasi-friends then the business possibilities will be enhanced. It would be harder if they treat Indian companies merely as businesses," he said.

"Indians like to laugh. A sense of humour - of course always taking into account the required politeness towards business partners - is very well received and additionally reinforces the personal relationship."

The brochure highlights a number of ways in which Swiss hotels in particular can raise their game to make Indian guests feel even more welcome.

For example, it points out that Indian tourists often come in family groups and that is it vital that they can all sit together at one table at meal times.

Small points, such as providing fresh water free of charge and tea-making facilities in hotel rooms, will go a long way, the brochure states.

On the culinary side, many Indians prefer home cooking to Swiss dishes. "With some typical Swiss cheese specialities such as fondue and raclette a certain amount of restraint is necessary as dairy products are not always easily digestible," it says.

Indians spent a total of 284,390 nights in Swiss hotels last year, up 14.2% on the previous year. In 1980 they spent only 70,579 nights in Switzerland.
The most popular Swiss destinations are Engelberg, Zurich, Lucerne, Interlaken and Geneva.
Indian tourists stay an average of 10 days during their visit, usually between the months of April and July.
They spend on average SFr250 ($205.75) per day during their Swiss holiday, amounting to SFr71 million ($58.4 million) a year.

India has the second-biggest population in the world behind China at 1.1 billion inhabitants or 16.7% of the world's population.

The economy has grown annually at an average of 6-7% (gross domestic product) over the past 10 years, picking up to around 8% growth in the past three years.

Indian filmmakers began arriving in Switzerland in the early 1960s to shoot Bollywood movies against the backdrop of the Alps.

Some 15-18 Bollywood movies are shot or partially shot in Switzerland each year, although some contain just a few Swiss location shots. 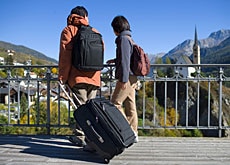 There are dark clouds on the horizon for the Swiss tourism industry even though the country as a tourist destination is more popular than it has ... 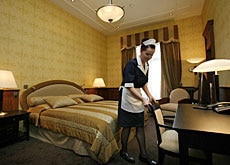 The Swiss tourism industry is thanking the bullish global economy and weak franc for its 34.8 million overnight stays in 2006 – up 5.8 per cent on ... 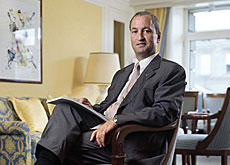 Hotelleriesuisse - the main Swiss hotel association - has urged its members to concentrate on quality in 2007, its 125th anniversary. At a news ...