Hemel-en-Aarde, "heaven and earth", is a region east of Cape Town, South Africa, where two Swiss expatriates produce their own selection of wines.

The last stretch of the drive to the vineyards of Jean-Claude Martin and Christoph Kaser is a reddish-brown dirt road. A gate with the South African flag - and a smaller Swiss one - indicates the entrance to the Creation Wines estate, a few kilometres inland from the quaint coastal town of Hermanus.

It is distinctly cooler here 350 metres above sea level. Yet it is still warm for a winter day in South Africa. The sounds of frogs and crickets from the nearby water reservoir welcome visitors. The scent from the tasting room and a garden around the cellar hangs in the afternoon air.

Ideal conditions for winegrowing and little piece of heaven for 37-year-old JC, as Martin is called by his staff.

“It was love at first sight,” he recalls. He and his Swiss business partner bought the land in 2002.

Sheep were grazing here before the two winemakers decided to turn the virgin land into vineyards. The terroir stretches around between two mountain ranges, which occasionally receive a sprinkling of snow in the cold season.

“Temperatures can also drop below freezing at night on the estate, which is good for the vines. But the weather conditions are stable throughout the year,” says Martin.

The 22 hectares now yield about 200 tons of grapes and an annual output of 120,000 bottles. It is a niche production for South Africa but remarkable compared with Switzerland.

Standing in the middle of the hilly territory of the valley, away from the bustle of the city, the quiet is interrupted only by a farmer’s car on the road in the distance or the hum from a ventilation system in the cellar.

Growing as many as ten different varieties of white and red wines, including sauvignon blanc, chardonnay, pinot noir, syrah and merlot, on a plot this size might not necessarily be best from a commercial viewpoint, Martin acknowledges.

But it’s the quality that counts. “At this stage it is also about finding out what varieties do better than others here,” he explains.

The first wines were only harvested four years ago and in 2009-2010 the estate reached full production levels.

Martin and Kaser know they are in for a long haul as it will take up to ten years before their investment could begin to pay out.

So far there has not been a day when Martin has regretted the decision to leave Switzerland and settle in the country of his South African wife.

Martin is aware that he has been taking a risk as a young entrepreneur, but he is confident. “You don’t know how things will work out in the end. But it is important for me to have taken the step and I have a great time here.”

The Swiss is also quite optimistic about the future of South Africa, despite the problems that plague the country.

There’s no denying the huge gap between the rich and the poor and the potential for tensions between blacks and whites.

Martin says by settling in South Africa he has been creating jobs that can feed around 30 families in the area. He employs farm labourers and local staff for the cellar and the wine tasting facilities.

He says he makes no difference between people of different backgrounds. “It is their work that counts.” He says he wants to pay fair salaries and to keep work done manually in the vineyards and the cellar rather than use machines.

Martin says he knows of other Swiss winemakers in the region, but he doesn’t seem to feel a special urge to seek close contact. “We all have our own busy lives and clients,” he says.

He aims for an international market and exports his wine to ten countries. His winery also attracts an increasing number of South African wine enthusiasts who find their way to Hemel-en-Aarde.

He feels a greater degree of independence as a winegrower and entrepreneur in the Cape region than in the closely-knit Swiss society, where projects can be blocked by long administrative procedures and complaints by jealous neighbours, he says.

Martin is convinced that he could go and live in many other places around the world as he finds it easy to adapt to a new environment.

And when it comes to the football World Cup in South Africa he takes a pragmatic view.

“I think my family supports neither the South African nor the Swiss team. Together with our son we will be rooting for Spain.”

There are just over 9,000 Swiss living in South Africa according to 2009 figures from the Swiss foreign ministry.

More than two thirds of them are dual nationals.

The Swiss community in South Africa is the largest on the African continent.

The first Swiss who arrived in the Cape region were soldiers and employees of the Dutch East India Company in the second half of the 17th century.

Following several immigration waves over the centuries, including missionaries, scientists and businessmen, the Swiss expat community reached a peak in the 1970s before the numbers dropped again.

Jean-Claude Martin, 37, went to school in the northwestern Swiss town of Biel/Bienne and trained as a winemaker both in the French and German-speaking parts of Switzerland.

He is married to a South African and has two children. They moved to South Africa in 2004.

In the late 1990s Martin made a name for himself with a pinot noir from a vineyard on Lake Neuchâtel.

In 2002 Martin and his business partner Christoph Kaser bought land in the Hemel-en-Aarde region 120km east of Cape Town to set up Creation Wines. Their first small harvest was in 2006.

It may be hard to believe now, but in the 17th century, the Swiss had a reputation for being a nation of heavy drinkers. An exhibition at the ...

2010 could prove to be a very good year for the wines made in a little known corner of Switzerland. The eastern village of Fläsch in the Rhine ... 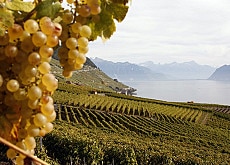 Drops of red and white

A Swiss winemaker sets up a new estate in South Africa, looking for an international market for his wares. Jean-Claude Martin grows ten different ...

Visperterminen in Valais has always been proud to lay claim to the highest vineyard in Europe, rising from 650 to 1150 metres above sea level. But ...