Switzerland has been taking on an increasing number of laws from the European Union over the past two decades even though it is not a member of the 27-nation bloc.

Thomas Cottier, a professor of European and economic law at Bern University tells swissinfo.ch to what extent legislation in Switzerland has already become compatible with the EU.

Switzerland is staying on the sidelines of the EU and a formal application for membership remains frozen. The government decided to focus on bilateral treaties with Brussels until further notice.

Nevertheless, a cabinet minister recently tried to reactivate a public debate about the advantages of EU membership for Switzerland.

swissinfo.ch: Do you agree with the Swiss government which warns that the bilateral path with the EU is becoming increasingly narrow?

Thomas Cottier: I do, and for several reasons. For one the EU is today made up of an increasing number of members. In addition the issues to be negotiated are rather complex.

Agreement has to be found on different issues with all the members. As a result it takes more and more compromises to find a solution.

The EU has to be wary not to grant Switzerland any privileges which could make EU member states jealous.

swissinfo.ch: Is the rightwing Swiss People's Party justified in arguing that EU membership would mean a loss of sovereignty for Switzerland?

T.C.: Strictly speaking this is correct. Membership in a supranational organisation results in a transfer of rights away from a sovereign country. The scope, so to say, would be reduced from the situation as it is today.

But in reality Switzerland is already suffering a considerable loss in sovereign rights. We take on EU legislation without having been able to influence its creation, let alone participate in the drafting of the bills.

From this point of view Switzerland position as non-EU member - or passive membership if you like – is to blame for this.

T.C.: Not at all. Our research has shown that about 50 per cent of Swiss laws are directly affected by the EU. However, there is no or only an indirect impact on the rest of the legal regulations.

This is notably true for large parts of the law on cantonal and local levels where the instruments of direct democracy remain intact.

Direct democracy still has a role to play in the implementation of EU laws. A regulation could be rejected in a referendum for instance.

This is already the case with the packages of bilateral treaties which interlink accords - a model which has its pros and cons.

swissinfo.ch: How could Switzerland improve its international standing if it were to join the EU?

T.C.: Switzerland would be able to break its isolation in Europe and could participate in networks on the level of governments, their administrations and parliament.

The country could take part in the legislative process, help set the political agenda and live up to its own democratic ideals.

At the moment this is made increasingly difficult because Switzerland has become dependent on decisions taken in Brussels or in other European capitals.

swissinfo.ch: You're saying Switzerland is already part of the EU, but has no say?

T.C.: That's right. Switzerland adopts as many EU rules and regulations as EU member state Austria. So there are no longer fundamental differences between the two countries.

Take air traffic for example. It would not be possible to fly cheaply if it was not for EU laws. There are plenty of other examples.

swissinfo.ch: But why would Swiss voters probably still come out against membership at the ballot box?

T.C.: It could be because they don't want to know better. On a political level the People's Party has been very successful with its anti-EU stance. Other parties were compelled to tread cautiously.

There is also a lack of transparency about the influence of EU legislation, as no official statistics are available on the issue.

Many wrongly believe that the impact of EU laws is limited to technical regulations, but far from it. Crucial legal areas, including cartel laws, social law and legislation on food are defined to a large extent by Brussels.

What's more the media tell you on a daily basis that the government is planning further legal amendments in line with the EU to strengthen Switzerland's economy and eliminate unnecessary trade barriers.

T.C.: Switzerland has gone through difficult periods with its foreign policy. There is growing awareness that the government can no longer represent the interests of the country sufficiently if it continues to go it alone.

I think that the concerns of citizens about an alleged loss of our tradition of direct democracy will be lessened when they realize how close Switzerland is to the EU.

The government has ruled out an automatic acceptance of EU laws.

Foreign Minister Micheline Calmy-Rey last week said the flexibility offered in bilateral treaties would be at risk if Switzerland agreed to any form of automatism.

In its latest foreign policy report published in September the ministry warns that Switzerland must be ready to adapt its approach to European policy if interests so require.

In an interview with a German newspaper Calmy-Rey said economic interests and issues of direct democracy were key for Switzerland's stance on membership in the EU.

Switzerland is not an EU member, but has concluded more than 20 major bilateral accords with Brussels since 1972.

Voters in 1992 rejected the European Economic Area treaty; an application for EU membership has been lodged but remains dormant.

Cottier is managing director of the World Trade Institute, and professor of European and International Economic Law at Bern University.

He also heads the Institute of European and International Economic Law.

The 59-year-old Cottier has been a member of several committees of the World Trade Organization and its predecessor institution, the General Agreement on Tariffs and Trade.

He also worked at the Geneva-based Graduate Institute of International and Development Studies. 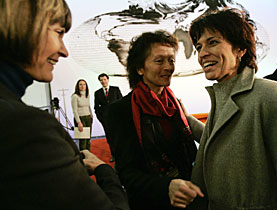 Voters endorse labour accord with EU

A key bilateral accord with the European Union on open labour markets has won a clear majority at the ballot box. Rightwing parties, which forced ... 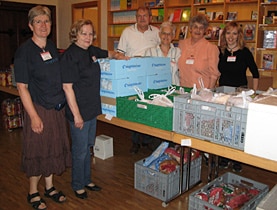 Putting food on the table during tough times

While many Swiss are concerned about job security, wage cuts and pension funds, people here trapped in poverty remain in need of more immediate ... 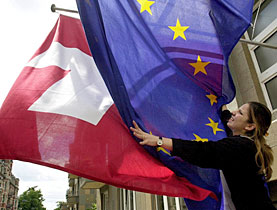 Foreign Minister Micheline Calmy-Rey has called for increased efforts to forge closer bilateral relations with the European Union. She came out ...

Switzerland and the EU

A troubled relationship. Switzerland has a turbulent relationship with the European Union. While many Swiss would be happy to join the EU, there ...