They beat Belgium's Xavier Malisse and Olivier Rochus on Saturday 4-6, 7-6 (6), 6-3, 6-3 in their first doubles match since winning the gold medal in Beijing.

Their victory in Lausanne gave Switzerland an unassailable 3-0 victory in the best-of-five playoff series.

The match went in favour of the Swiss when Federer – the world number two player – saved a set point in the tiebreaker to prevent the Belgians leading by two sets to nil, volleying a winner at the net after following up his own serve.

Playing their first Davis Cup doubles match together, Federer and Wawrinka took the set when Malisse's volley went long to end a 15-stroke rally that saw all four players making improvised shots at the net.

The Belgians, who won the 2004 French Open doubles title on clay, broke Federer's serve at 4-4 in the first set. Malisse served out to win the set before a sold-out crowd of 6,400 at the indoor Malley stadium.

Malisse was broken twice in the third set and again in the fourth as Switzerland enjoyed a comfortable win, regaining a place in the 16-nation World Group after being demoted last year.

Federer, the United States Open champion, beat Kristof Vliegen in straight sets (7-6 (1), 6-4, 6-2) after asking for the line judges to be replaced early in the second set following some disputed calls.

Saturday's match was played after a special on-court ceremony to celebrate Federer and Wawrinka's Olympic triumph last month, one of two events in which Switzerland won gold. Fabian Cancellara in the men's cycling time trial was the other.

"We came into this tie as big favourites and we lived up to expectations," Federer said. Now we can enjoy Sunday and then look forward to the World Group next year."

Federer said he felt honoured and proud to represent Switzerland but was still unable to commit to the Davis Cup for 2009 and beyond.

"I don't know yet but it looks good," he said. "On Tuesday we will know the draw; that's going to answer many questions.

"It depends a lot on the ITF (International Tennis Federation), if they get their act together and put the Davis Cup weeks in the proper place.

"We have had long discussions and it has always been very difficult because some people think they know better than us players. It's actually cost me the Davis Cup for the last four years, unfortunately, because people won't understand."

The Davis Cup is the top international team event in men's tennis. In 2005, 134 nations entered the competition.

There are five "leagues", the top being the World Group of 16 nations who compete for the cup. The four-round World Group knockout competition is spread over four weekends during the year. Each tie between competing nations is held in one of the countries.

Teams, which comprise four players, are seeded based on a ranking system released by the International Tennis Federation, taking into account previous years' results.

In September 2007 a Federer-led Switzerland lost a play-off with the Czech Republic and were relegated to the Europe/Africa Zone Group I, a place they had not been in since 1994. 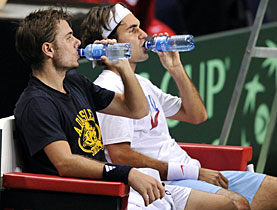 Roger Federer and Stanislas Wawrinka have posted two victories in Lausanne in their effort to lead Switzerland back into the elite tennis Davis ... 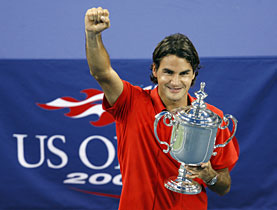 Federer beats Murray to make it five at US Open

Switzerland's Roger Federer has won his fifth straight US Open title, thumping Britain's Andy Murray 6-2, 7-5, 6-2 in the final on Monday. It's ... 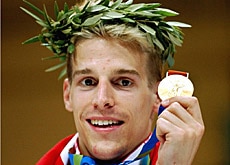 Switzerland have won their first medal at the Athens Olympics after Marcel Fischer grabbed gold in the men’s fencing competition. But two-time ...