Tea is being grown in Switzerland for the first time, on the Brissago islands of Lake Maggiore.

The first crop of green tea leaves is expected this year.

The world’s favourite beverage after water, tea is consumed around the world and is part of the national culture in many countries. Traditionally, it is grown in tropical and subtropical countries.

The idea of planting green tea in Switzerland came from Peter Oppliger, a plant expert from Lucerne who is also an avid tea drinker.

Working alongside botanists and gardeners, Oppliger decided to launch a trial tea-growing project in the southern canton of Ticino.

One hundred plants are now being cultivated on the Brissago islands where it is hoped they will thrive thanks to the warm and sunny climate.

“The beginning of this experiment is a great honour for us, because it is the first tea plantation in Switzerland,” Pamela Merlini, the islands’ administrator told swissinfo.

Apart from being of scientific interest, the green tea grown on the Brissago islands could also become a major tourist attraction in future.

“We intend to hold seminars twice a year focusing on the plants and tea production,” said Merlini.

“We will also consider the medicinal benefits and cultural aspects of tea.”

In many countries tea drinking is a kind of rite, forming part of religious and social ceremonies.

From Darjeeling to Brissago

“Tea is extracted from the tea plant, whose Latin name is ‘Camellia sinensis’,” Oppliger explained during the presentation of his project.

“Camellia sinensis is an evergreen plant of Asian origin that is cultivated in the Indian regions of Darjeeling and Assam as well as in southern China,” he added.

He said the tea plant was botanically related to the various types of camellias already flourishing in the parks and gardens of canton Ticino, although these were unsuitable for tea production.

And he pointed to the existence of a 40-year-old tea plant in the botanical gardens as an indication that this variety was perfectly at home on the islands and could be cultivated for tea.

When the time comes to harvest the crop next year it will be clear whether the experiment has succeeded. If it has, tea-tasting seminars are bound to follow.

The Brissago islands plantation consists of about 100 tea plants.
The plants are cultivated on terraced slopes in the botanical gardens.
The English “tea”, German “Tee”, French “thé” or Italian “tè” stem from the Asian words “ch’a”, “tscha” and “caj”.

Traditionally, Japan is known as the country of green tea, which has been produced there for 800 years.

If they were a few hundred metres further south, the Brissago Islands on Lake Maggiore would belong to Italy and Switzerland would be deprived of ...

Lying on the southern side of the Alps, Ticino is Switzerland's only Italian-speaking canton. In common with Italy, it has a certain Mediterranean ... 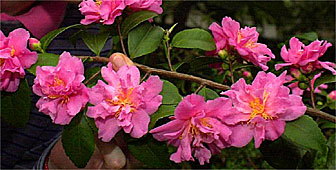 A fragrant tour of Locarno and Lake Maggiore

Springtime on the shores of Lake Maggiore in southern Switzerland begins with a festival of fragrance. Over 300 varieties of the camellia flower ...