A spate of minor train accidents and other rail-related problems – eleven in two months - have raised questions about the safety and saturation of the national network, one of the busiest in the world.

Some have also caused considerable disruption to passengers.

On Wednesday Swiss Federal Railways reported an incident at Geneva Airport when just before 5 a.m. a regional train ran into an empty train standing at the station, causing slight damage to both.

No one was injured but one in six trains between Geneva and Geneva airport was cancelled on Wednesday morning.

Federal Railways also said on Wednesday that the international rail link between Brig in southern Switzerland and Domodossola in Italy was cut for five hours from midday owing to a police intervention.

Valais police reported that there had been an anonymous bomb scare to a local media. A replacement bus service was set up between Brig and Iselle in Italy.

This incident follows a series of other accidents and problems since the start of the year (see infoBox).

The Federal Railways held a press conference on March 11 to reassure passengers that the accidents were just an “unusual” set of circumstances with a multitude of different causes, and that security was its main concern.

“We can practically exclude any relation between these different incidents,” Philippe Gauderon, head of infrastructure at Swiss Railways, told reporters.

Swiss Railways said each incident is being studied in detail and an independent group of engineers, Basler+Partner from Zurich, has been called in to carry out an external report.

Investment in rail safety has continued to rise, and the number of collisions, derailments and incidents linked to signalling or manoeuvring, has decreased, argued Hans Vogt, in charge of safety at Swiss Railways.

Despite a continual increase in goods traffic, the Swiss network is increasingly secure, he added.

A series of accidents

January 10: two regional trains collided just outside Schaffhausen resulting in 26 people injured. One of the drivers had ignored a signal.

February 2: a goods train travelling between Palézieux and Payerne in western Switzerland was unable to avoid fallen rocks.

February 16: after a rail broke, a suburban train carrying 125 passengers derailed at Schwerzenbach near Zurich. No one was hurt.

February 27: a train and a goods train collided at a station in Basel. A signal had been disreguarded.

February 28: A goods train came off the rails at Bassersdorf in canton Zurich. A faulty wheel was apparently to blame.

March 6: A waggon loaded with gravel derailed at Effingen, canton Aargau, during a manœuvre. Loading instructions had apparently not been followed.

March 7: A goods train derailed at a suburban station in Bern; inter-city trains between Bern and Fribourg were cancelled as were some local trains. Buses were provided instead.

March 7: A minor accident occurred during a shunting manoeuvre at Geneva station, but had no impact on the flow of traffic.

March 10: A shunting locomotive ended up in the Venoge river at Cossonay in canton Vaud when for reasons unknown it failed to stop at the end of a siding.

March 11: A train of the private Matterhorn-Gotthard railway ran into an avalanche when it emerged from the Oberalp pass tunnel between cantons Graubünden and Uri. No-one was hurt, but through traffic on the line was disrupted.

Nevertheless, some observers are concerned about the saturation of the network and Swiss Railways’ reaction, considered too passive.

The Transport Staff Union (SEV) said it was worried about the growing number of trains using Switzerland’s 3,000 kilometres of track.

Gauderon admitted that Switzerland had the busiest network in Europe, “but every time we add a train to the schedule a serious study of risks is carried out”.

He added that there had been an increase in the budget for repairs and maintenance of several hundred million Swiss francs a year.

But Barraud felt this was not enough: “Swiss Railways are living in the past. The Swiss network used to be a shining jewel. Since 2000 they have just been doing the bare minimum to keep it all functioning.”

The union official also bemoaned the reduction in training for train drivers and signalling managers, which has been cut from 15 to nine months.

Rail expert Walter von Andrian believes the recent accidents could be blamed on 15 years’ neglect since Swiss Railways’ reforms in 1999, which led to savings on the up-keep of track and trains. He said Swiss Railways had also not invested enough in staff training, especially drivers.

“On a highly complex system like the Swiss Railways there are always errors but when the general working conditions worsen, then the errors begin to pile up,” he told the Tages-Anzeiger newspaper on Thursday.

The Swiss Federal Railways not only operates the densest train network in the world, it also coordinates trains with other means of public transport. 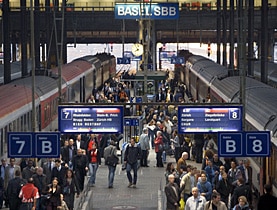 Swiss Railways heads towards its limit

Delays, cancellations and overfull trains and stations – these are scenarios that are not normally associated with the Swiss train service. Swiss ...

Some people collect toy trains as a hobby. For others only real ones will do! A Swiss collector started buying and restoring historic trains. He ...