Two officials working at the Iraqi diplomatic mission in Geneva have received stiff fines for a huge cigarette smuggling scam. Some 600,000 packets of cigarettes were sold on the black market in northwest France.

The Federal Customs Administration on Monday confirmed a SonntagsZeitung report which stated that they had abused privileges normally reserved for diplomats and illegally resold duty-free cigarettes in France over a three-year period.

As smuggling has a seven-year statute of limitations, almost a third of the volume could not be sanctioned. The federal authorities also rejected a request from the Iraqi mission to reduce the fine of one of the employees, who has since been fired.

According to the customs office, the smugglers ordered the cigarettes from a firm in northern Germany which specialises in duty-free deliveries for diplomats, embassies and international organisations. They were then sent to a delivery firm in French-speaking Switzerland.

The goods were subsequently transported to a rented warehouse in Ferney-Voltaire in France, not far from Geneva Airport. From there the cigarettes were sent to the city of Rennes in northwest France, where they were resold on the streets.

Swiss police were tipped off when the Hong Kong Chamber of Commerce complained to the Swiss authorities that unknown individuals had ordered cigarettes on their behalf.

The clock is ticking for Switzerland’s only remaining factory processing local tobacco. How long can it fend off market pressures?

A Swiss court has confirmed the previous acquittals of seven of the nine defendants accused of money laundering in the country's largest organised ... 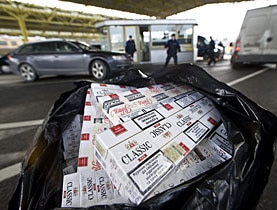