The shift in relations between the United States and Cuba will have repercussions which go beyond simple bilateral agreements. But for real change the US will have to lift the embargo imposed on Cuba more than 50 years ago, experts tell swissinfo.ch.

“The idea of a reconciliation – already put forward by Kennedy – has finally come about. It’s a historic event for all Cubans,” said Orlando Blanco, a publisher from Geneva who between 1964 and 1967 was chargé d’affaires at the Cuban embassy in Bern.

He hopes that the Cuban population can now “express themselves more freely and that the system of repression is abolished”.

On Wednesday US President Barack Obama and Cuban President Raúl Castro announced plans to restore diplomatic relations, frozen since 1961. The US will remove Cuba from its list of countries that support terrorism and ease certain restrictions on travel, trade and exchanging money. Cuba said it would free 50 political prisoners and open up for staff from the United Nations and the Red Cross.

Change in the air

“I expected a prisoner swap as a first step. But Obama went further,” he said.

Cavalli, a doctor and co-founder of mediCuba-Svizzera, an NGO which focuses on healthcare cooperation between Switzerland and Cuba, added that change had been in the air.

“Recently there have been small signs, including some editorials in the New York Times, which were going in this direction. For example [US Secretary of State] John Kerry praised the work of Cuban doctors in Africa who were tackling Ebola. Then there were the visits to Cuba by various American politicians and big-name economists.”

But Cuba also clearly pushed for change, according to Claude Auroi, honorary professor at the Graduate Institute of International and Development Studies in Geneva. “The regime was unsustainable and Raúl Castro needed money,” he said.

This view is shared by Michael Parmly, former chief of mission of the United States Interests Section in Havana from 2005 to 2008. In an interview with Geneva newspaper Le Temps, Parmly said Castro had launched reforms which were, nevertheless, taking time to bear fruit.

“With this move, he hopes to be able to restart the economy,” he said.

From a political and psychological point of view, Cuba is without doubt the winner, according to Cavalli, who points to the joy of the population.

“It’s the victory of David over Goliath. Despite half a century of attempts, it never let itself be strangled,” he said.

For Orlando Blanco, however, the Cuban system is a “failure”. Deprived of the strong support of China and Russia, the Cuban government is forced to take another route.

“It wants to follow the Chinese model – or rather, adopt a form of 1920s capitalism based on low wages and production costs, while at the same time keeping the rigid structure of a communist system,” he said.

Cuba, however, is too small and doesn’t have the power of China, underlines Auroi. “As soon as the American companies return, it will be difficult to resist democratisation. The system will not resist without the Castro brothers because there is no serious political change.”

But he thinks that despite Raúl Castro’s comments, which showed him to be inflexible on political openness and respect for human rights, the reconciliation with the US will have an effect on Cuban society.

“With the opening of borders and the dissemination of information, various influences will change society and the opposition movement will increase,” he said.

In Cavalli’s opinion, the measures announced on Wednesday, although significant, will not have a crucial impact for Cuba.

“There will be more American tourists and Americans with Cuban origins will find it easier to send money, but the real change, which will have a big economic effect, will only come about with the lifting of the embargo.”

This is also necessary for domestic politics, he says. “All the Cubans in positions of responsibility with whom I’ve spoken in recent years have said that the condition for opening up is chiefly the abolition of the economic blockade. Until that happens, nothing much will change.”

As the White House spokesman said, Obama would like an end of the embargo to be reached before his term in office finishes in 2016. But to do this, he will have to overcome the obstacle of Congress, with its Republican majority.

But after Wednesday’s thaw, a step backwards seems unlikely. “Today, the move towards liberalising the economy is irreversible. Going back is impossible,” said Auroi, adding that sooner or later the embargo would be lifted because economic interests would win out in tourism, agriculture and industry.

“Many business people in the United States are interested in developing contacts with Cuba, also because Cuba has extremely qualified human resources, above all at an academic level,” Cavalli said.

“There will be an objective push to go forward with this reconciliation. It would be illogical to want normal relations but maintain the economic blockade.”

Switzerland has represented US interests in Cuba – and vice versa – since 1961. Since an agreement in 1977 between US President Jimmy Carter and the government of Fidel Castro, Switzerland’s role has become more marginal.

For Franco Cavalli, Switzerland’s role is more theoretical than practical.

“Whenever there was a real problem between Havana and Washington, the two countries would always find a means to talk. The Swiss mediation has been a bit passive,” he concluded.

January 3, 1961 - The US breaks off diplomatic relations with Cuba after the nationalisation of US-owned properties.

April 16, 1961 - Castro declares his revolution is socialist. The next day, CIA-backed Cuban exiles try to invade Cuba at the Bay of Pigs, but are defeated.

February 7, 1962 - The United States imposes a complete commercial embargo against Cuba that remains in place.

October 1962 - The United States discovers Soviet nuclear missiles on Cuba, leading to a showdown with the Soviet Union that almost leads to war. The confrontation ends with the Russians removing the missiles and the United States agreeing never to invade Cuba and, secretly, pulling its missiles from Turkey.

April-October 1980 - Cuba allows 125,000 people to travel to the United States from the port of Mariel in what becomes known as the Mariel Boatlift.

December 1991 - The Soviet Union, Cuba’s biggest benefactor, collapses, touching off an economic crisis from which the island has not fully recovered.

December 2009 - Cuba arrests Alan Gross. It later convicts the US Agency for International Development subcontractor to 15 years in prison after accusing him of importing banned technology and trying to establish a clandestine internet service for Cuban Jews.

December 17, 2014 - Gross is released and flown back to the United States, and a spy held in Cuba is freed in exchange for three Cuban intelligence agents held in America. Washington says diplomatic relations will be restored and many commercial restrictions eased.

The United States and Cuba have agreed to establish diplomatic relations and open economic and travel ties. At this stage it is unclear how these ...

Press review ‘The most audacious act of Obama’s presidency’

Swiss media have greeted the news of rapprochement between the United States and Cuba with unqualified praise for US President Barack Obama, ...

Good offices Adjusting to the changing face of conflicts

Good offices continue to play a significant role in Swiss peace policy, according to the foreign ministry. However, the number of protecting power ...

Basel-born diplomatic heavyweight Heidi Tagliavini tells swissinfo.ch about the tragedies witnessed in Eastern Europe, which she says were ... 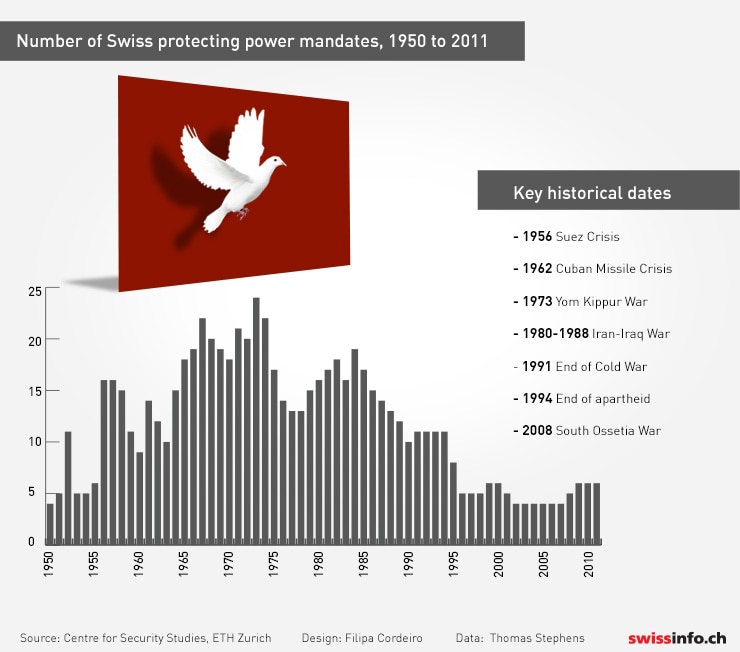