Scary headlines involving banking secrecy and the Internal Revenue Service have got Americans living abroad worried about how to deal with the tax man.

Some have decided to stop worrying by renouncing their US citizenship; others are starting to think about the radical move.

A recent article in the Tages-Anzeiger newspaper suggested that an increasing number of Americans were renouncing their citizenship.

According to US government records, 743 people renounced US citizenship or permanent residency in 2009, compared with 235 in 2008.

Ex-American Fred Patterson*, who lives in eastern Switzerland, renounced his citizenship in December 2008 – about a year after he and his Swiss wife came to Switzerland to retire.

Through naturalisation, both Patterson and his wife were citizens of the US and Switzerland. As pensioners, they found that US tax obligations were taking a major chunk of their fixed income.

"We decided that this was an untenable situation – unfair, actually. We felt we had two options, the first being to take it to the American Civil Liberties Union and the Supreme Court – and you can imagine how daunting that is as a private citizen,” Patterson told swissinfo.ch.

Patterson cites the slogan "No taxation without representation," which was what the colonists chanted during the American Revolution against Britain in the 18th century. As he points out, Americans abroad are not represented in Congress, making the practice of taxing them unconstitutional.

“The second option – which we did not relish at all – was to give up our American citizenship," said Patterson.

Indeed there are many Americans struggling to wade their way through IRS paperwork. Earlier this month, the Geneva-based American Citizens Abroad hosted an event on tax and disclosure requirements for Americans.

“We are hearing plenty of echoes that many Americans who are long-term overseas residents are finding it very difficult to function overseas because of their American nationality; some are being forced to consider renouncing their US nationality in order to survive, but they are not doing it to avoid taxes. They already pay taxes where they live,” ACA director Jackie Bugnion told swissinfo.ch. Like Patterson, Bugnion is also bothered by the fact that overseas Americans have no voice in Congress.

American citizens living abroad are expected to file their taxes by June 15 – two months later than their colleagues back home. Many find the process unfair; the United States is one of just a few nations that require their overseas citizens to pay taxes.

Yet as a retired teacher, Patterson did not qualify for such exclusions. Those are valid on earned income only – not on pensions or capital gains.

“Those who are actually in the working world don’t necessarily have to give up their citizenship to survive. But those not earning and not extremely wealthy don’t have that option,” said Patterson.

Meanwhile, Amy Jones* of Geneva has been thinking about renouncing her US citizenship for about two years now. Originally from New York City, she also has a French passport.

“I have been living in Switzerland for 30 years and half of my family is here (son and grandchildren). I have no intention to return to the US except for visits to my daughter twice a year,” Jones told swissinfo.ch.

She added, “Also, I must admit quite frankly that I have a property in France which I would like to sell eventually, and I think it is dreadful that I would have to pay capital gains in the US when there are none in Switzerland or France.”

Whatever she decides, Jones says she has experienced supportive reactions from the people she’s talked to about it, including her children, her brother in the States and a few friends.

Martin Naville, director of the Swiss-American Chamber of Commerce in Zurich, knows of several global citizens who have two and even three passports to their names. According to him, a typical renunciant could be somebody born in the US while his parents were working there – somebody whose centre of life isn’t in America.

“Most of the people I know (who’ve done it) would say, ‘I have a passport, I’ve never used it, I never will use it, I don’t feel American ... it’s becoming a big hassle so let’s get rid of it.’ That’s the kind of talk there is,” Naville told swissinfo.ch. He said he hasn’t had the impression that people are trying to avoid taxes.

Not a nice feeling

For those who want to renounce their US citizenship, American law requires them to appear before a US consular or diplomatic officer abroad and sign an oath.

The first available appointment at the US Embassy in Bern is in May 2011, according to the US Department of State in Washington, DC. Alternatively, people can contact other US embassies and consulates to see if there is an earlier slot.

A year’s wait may seem like a long time, but as the spokesman pointed out, it is a serious legal proceeding, which is time intensive and non-routine. It is also just one of many tasks handled by embassies and consulates.

The US Embassy Bern is where the Pattersons signed their oaths of renunciation. Although the entire process took several months plus loads of IRS paperwork and expensive legal aid, the act itself lasted just half an hour.

Patterson remembers the consular clerk confirming that they would not be stateless and saying that he regretted their decision to renounce.

“Exiting the embassy after having giving up the citizenship, both my wife and I felt something was missing.

*names have been changed

In 2009, 743 people around the world gave up their right to live in the United States.

Statistics from previous years are hard to pin down, but it seems that a few hundred per year is typical.

Yet not all renunciants were US citizens. Some were green card holders or permanent residents who simply decided to go back to their native countries.

In any event, they represent a small percentage of the overall US population of about 310 million, 6.6 million of whom live abroad.

Some 16,500 Americans live in Switzerland, according to the Federal Migration Office.

New US tax law could have "disastrous effects"

A United States law forcing foreign financial firms to reveal details of American clients could force banks to stop trading across the Atlantic, ... 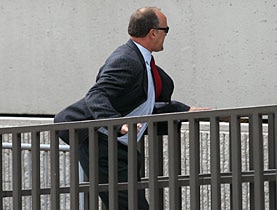 A United States tax amnesty, part of a campaign to crack down on perceived tax havens such as Switzerland, has netted 7,500 repentant tax dodgers.

Switzerland’s appeal is no secret among high net worth individuals. While there’s no one recipe for wealth management on Swiss soil, good advice ...