Basel-based artist Klaus Littmann has transformed a 30,000-capacity stadium in southern Austria into a forest as part of an exhibit paying tribute to nature. It is Austria’s largest public art installation.

The exhibit, “For Forest: the unending attraction of nature”, opens on September 8 at the Wörthersee football stadiumexternal link in Klagenfurt, Austria near the border of Slovenia and Italy.

The inspiration for the exhibit was a dystopian drawing of the same name by Austrian artist and architect Max Peintner, which Littmann discovered nearly 30 years ago.

On his websiteexternal link, Littmann explains that the exhibit seeks to “challenge our perception of nature and question its future.” It aims to provoke reflection on whether nature may someday only be found in designated spaces in the way animals are found in zoos.

"For many, because of the current situation, this represents a memorial as part of the climate change discussion," Littmann told Reuters at the exhibition in the lakeside city.

The exhibit includes the installation of 300 trees, some weighing up to six tonnes each, which were carefully transplanted over the football pitch. Over the two months of the exhibit, visitors can expect to see natural changes with the seasons including the leaves changing colours and wildlife build a habitat in the forest.

After the exhibit closes on October, 27 2019, the forest will be carefully replanted on a public site near the stadium as a “living forest sculpture.”

Littmann has been the mastermind behind many innovative art installations in Switzerland and globally that bring together local and international artists that display their work in public spaces – beyond the confines of museums and studios. 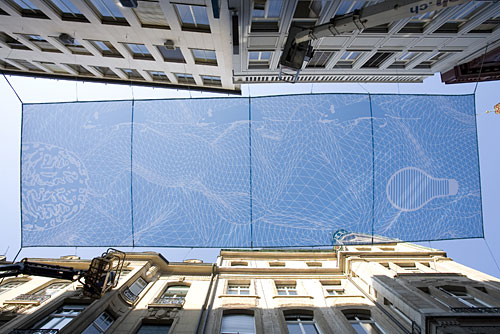 A colourful tapestry of images will hang in the streets above Basel for more than three months this summer, creating new spaces and atmospheres. ...

There are still 540 million bicycles in China, the former land of the bicycle - and tricycle. Soon cars will gain the upper hand on cyclists on ...

Swiss and international artists have transformed the landscape along the length of a valley in southeastern Switzerland.