Female politicians have launched a proposal to end compulsory military service in Switzerland in the hope of improving equality in the army.

A system of men and women volunteers, instead of conscription, would lead to more equality in the armed forces and put Switzerland in line with many European countries, according to the women's chapter of the centre-left Social Democratic Party.

The Swiss Society of Officers opposes the move, saying it would result in a shortage of volunteers were conscription to go.

Maria Roth-Bernasconi, co-president of the women's chapter of the Social Democrats, has begun the parliamentary initiative and is hoping to gather support before it is lodged in the autumn.

"We are concerned with equality in all domains. We want parliament to discuss this," she told swissinfo.

"We are calling for the abolition of the obligation to serve in the army so men and women can have equality in this."

The initiative says the fact that the obligation for men to serve is anchored in the constitution is a contradiction.

"To require compulsory service could be contrary to the European Convention of Human Rights on forced labour. You cannot force people to work for free for the state," Roth-Bernasconi added.

The issue comes up regularly in debates on the future of the army and motions have been put forward in the past to end conscription.

Denis Froidevaux, vice-president of the Swiss Society of Officers, says he is convinced that removing the obligatory service will lead to a lack of volunteers in the military.

But Karl Haltiner, a long-time professor at the Military Academy at the Federal Institute of Technology in Zurich, told swissinfo that conscription was out-dated and no longer needed in Europe.

"The mass armies which dated back to the 19th century and were actually created for inter-state war are not necessary any more in Western Europe," he said.

"Most European countries have large troops in areas of conflict, mainly for peace support operations. No European state is sending compulsory personnel into such missions. That is why most Europeans have abandoned conscription."

In Europe, 17 states have abolished conscription or are in the process of ending it.

"Switzerland is going to slowly be surrounded by those who have given up conscription. I think when Germany or Austria do the same, we will have this spill-over effect," Haltiner added.

Haltiner has promoted the idea of ending compulsory service since publishing his 1995 book Post-Modern Military.

He says modern armies need to be multifunctional "like a Swiss army knife", used for catastrophes, rescues and deterring war.

He recommends following France's lead and having one compulsory information day a year where people could learn more about the army and be encouraged to sign up as a volunteer.

Volunteers would work around 30 days a year on top of their regular job, be paid a low salary and be given some long-term incentives – an initiative he believes would attract up to 40,000 people a year.

He goes one step further by suggesting trying out a volunteer battalion in one of the Swiss cantons to see if people do join up. The effect could be the same as the volunteer fire brigade or the rescue corps that have quick responses to emergencies.

"I think Switzerland has had a national identity crisis since the end of the Cold War. Almost overnight the classical cornerstone of Swiss security policies such as neutrality, concordance, militia, conscription and federalism have lost importance," Haltiner argued.

Today's Switzerland is made up of traditionalists, European Union supporters and those who are undecided, he says.

"The army is a famous projection object for this type of crisis between left and right."

During the Cold War the Swiss army numbered 600,000 men who could be called up at short notice.
In 1995 the army was reduced to 400,000 and today is around 220,000.
Able-bodied males between the ages of 20 and 36 must serve 260 days of military service. Military service is optional for women and Swiss living abroad.

Switzerland ranks far behind Scandinavian countries and even developing nations like Sri Lanka and Lesotho when it comes to sexual equality, ... 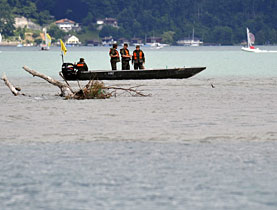 The rafting accident which claimed the lives of five soldiers earlier this month was poorly planned and the troops involved lacked the relevant ...