Think of Zurich and the image of money springs to mind, but it may be surprising to learn that the city has a short history as a financial centre.

An exhibition entitled "The People of Zurich and their Money" at the Museum Bärengasse, in the heart of the banking district, charts Zurich's rise from backwater to financial powerhouse.

The story starts with the discovery of Celtic coins, dated at around 100 BC, at the site of the current stock exchange and moves right up to date with contemporary thoughts on money from the latest crop of schoolchildren.

In between times Zurich clawed its way from virtual obscurity to a position of enviable prosperity with a little help from Catholic assets plundered during the Reformation, the invention of a mechanised minting press and the enterprise of revolutionary financier Alfred Escher.

The establishment of the Credit Suisse bank by Escher in 1856 and his influence behind the creation of the Swiss Re insurance company and the Federal Institute of Technology in the late 1800s laid the foundations for modern Zurich.

"Zurich has always played an important part in European trade because of its geographical location at the centre of the continent," said Jürg Conzett, head of Zurich's Money Museum, which is also behind the project.

"In medieval times the city acted as an important customs point for goods travelling between Germany and Italy. But Zurich was never particularly wealthy until Alfred Escher and other entrepreneurs arrived."

The exhibition takes visitors through an interactive tour examining the city's relationship with wealth both historically and thematically. Audio guides in English, German and French explain the significance of each display.

The exhibition also draws historic parallels between the issues that exercised the minds of our ancestors and those that make the headlines today.

In the early 18th century one of Zurich's best-paid professionals was the city executioner Jakob Volmar. The exhibition makes the connection between Volmar and today's big money earners.

"People accepted that Volmar earned a lot of money because he was a skilled professional who needed a lot of equipment to do his work," Conzett said. "It is interesting that people now object so strongly to bankers earning so much money."

Visitors to the exhibition may also be surprised to learn that Switzerland joined the Latin Monetary Union with France, Italy, Belgium and Greece in 1865, 15 years after the Swiss franc came into circulation based on the French currency.

All the coins of the member states could be used within the Union, however, Euro-sceptics may be pleased to note that the alliance collapsed in 1926.

Another historical connection on display is material from a left-wing political campaign against banking secrecy in the 1970s that led to a defeated national vote in 1984 on distributing the wealth of the banks among worthy causes.

Of course, no money exhibition in Zurich would be complete without an appearance by the famous "Gnomes of Zurich", depicted by a comical sculpture. Former British Prime Minister Harold Wilson famously applied this label to Swiss bankers whose speculation he blamed for the devaluation of the pound in 1966.

The exhibition seeks to provoke reflection and commentary in the shape of a video presentation entitled "Thirty barefaced lies about Money". Visitors are encouraged to write their thoughts on a blackboard after reading such lines as: "Money is freedom" and "In order to be happy one needs money".

Conzett believes that money has a different meaning for the present people of Zurich compared with their ancestors in one vital respect.

"In 1700 he who had physical control of money had control over people. That is why the wealthy locked their money away in chests," he said.

"But now money has lost much of that power and people are free to make up their own minds and cannot be controlled so easily."

Zurich is one of the most important global money markets in the world alongside New York, London, Paris, Frankfurt, Tokyo and Hong Kong. The city is also home to Switzerland's two largest banks, UBS and Credit Suisse, and numerous private banking institutions.

The Zurich stock exchange started trading in 1877, following the establishment of bourses in Geneva in 1850 and Basel in 1876. Geneva and Basel ceased trading in 1996 and all operations were switched to Zurich.

The first person to be given the right to mint coins in Zurich was the Abbess of the Zurich Fraumünster in 1045.

Zurich minted 9 million coins between 1555 and 1561 using gold and silver taken from the Catholic Church.

The People of Zurich and their Money exhibition runs at Zurich's Bärengasse Museum until March 4, 2007.
It is a joint initiative between the Museum Bärengasse and the Money Museum, both located in Zurich.
The exhibition is partly funded by the Credit Suisse Group Jubilee Foundation, set up to celebrate the bank's 150th anniversary. 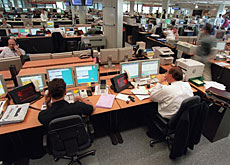 The fourth quarter result at Credit Suisse came as a disappointment on Wednesday after rival UBS had stolen the limelight with record 2005 ... 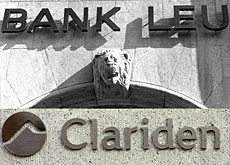 "Super bank" must evolve to flourish

Switzerland's second-largest bank said this week it will merge four private banks and a securities dealer to create a new operation called ...