Claude Nicollier became the first Swiss to go into space on July 31, 1992.

He circled the earth 136 times between the end of July and August 8 on the space shuttle Atlantis.

On August 7, he received a congratulatory call from the then Swiss transport minister Adolf Ogi.

Nicollier, remembering his first moments in space, told the newspaper, the Südostschweiz: "I had the feeling of being pulled against the ceiling. I kept banging my head against the control panels and fuses."

In his role today as a teacher, Nicollier says he has a certain responsibility to pass on what he's learned. "I've experienced the extraordinary."

Switzerland's only astronaut was among millions of people around the world to witness the historic Moon landing on the night of July 20-21, 1969. ... 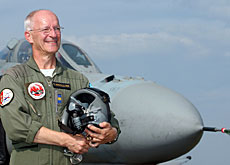 Space is for everyone, astronaut says

Retired Swiss astronaut Claude Nicollier tells swissinfo space travel is a life-enhancing experience and should be open to non-professionals. In ... 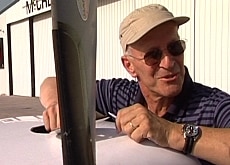 Swiss astronaut Claude Nicollier is the subject of a documentary, "For the love of the sky", that chronicles far more than his life as a pilot and ...