In May and June, Switzerland’s wild blueberry bushes are in bloom. They’re popular with birds, foxes and bears.

After the berries ripen in July and August, the leaves turn a spectacular crimson in the autumn. Unlike commercially grown berries, these smaller wild ones stain fingers and lips a deep blue. They are rich in iron, tannins and vitamins.

Blueberry bushes grow best in acidic, sandy soil, reaching a height of 30-60 centimetres. They occur in moorland, forests and mountains – rewarding hikers who are lucky enough to find the bushes in fruit. However, picking blueberries is forbidden in Swiss conservation areas because foxes, grouse and other animals depend on them.

Brown bears gather blueberries, too, something witnessed by Swiss wildlife biologist Mario Theus. In 2007 and 2008, he was keeping tabs on JJ3 – a male “problem” bear who’d been raiding garbage and compost bins.

“One day I saw him plucking blueberries at a leisurely pace. Then I went and fetched a hunter friend and long-time bear adversary, and the man was so impressed with the sight that he completely changed his mind,” Theus told newspaper Der Bundexternal link. Nevertheless, authorities called for JJ3 to be shot dead in 2008 – sparking criticism from environmentalists.

For people disinclined to forage, Swiss grocers offer blueberries nearly year-round. The demand is so great that Swiss farmers have nearly tripled their cultivation efforts over the past decade. In 2017 alone, they expanded their blueberry fields by 12% to a record 93 hectares.

Are the Swiss ready for bears? How to live with dangerous animals

Following the shooting of Switzerland’s only wild bear, M13, attempts are being made to stop future bears from suffering the same fate. (Julie ...

A queen Asian hornet, which eats “useful” insects like honey bees and other pollinators, has been caught in canton Jura. 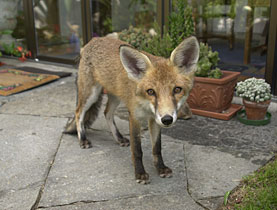 Cities develop their wild side

The urban fox population is on the rise in Switzerland – good news for some but problematic for others. Overall there is much more wildlife in ...

By Jean-Michel Berthoud and Isobel Leybold-Johnson

Ecology & technology Invasive plant species all over the internet

Researchers in Zurich have discovered that the sale of invasive plant species over the internet is much more widespread than previously thought.

The increasing popularity of such winter sports as free-ride snowboarding or snowshoe walking is threatening the survival of wild animals in ...

More and more non-native species are coming or being brought, often by accident, into Switzerland.