The drama Vitus and a documentary about the first United States marine who died in the war in Iraq have scooped this year's main Swiss film awards.

The prizes, which were awarded for the tenth time on Wednesday, are one of the highlights of the annual Solothurn film festival.

The jury praised Vitus as a poetic film full of tenderness and humour. The drama about a child piano prodigy and his grandfather features Bruno Ganz and Teo Gheorghiu.

Director Fredi M.Murer's latest film was a hot favourite to take home a top award. It won both critical acclaim and has sold almost 200,000 tickets since its release in German-speaking Switzerland last year.

It was also put forward by Switzerland for the foreign-language film Oscar - although it just missed out on a nomination earlier this week - and has been sold to more than 30 countries, including the United States.

On Saturday it was announced that the film had also won the public prize as well.

Best feature and best documentary prizes are both worth SFr60,000 ($48,000). A total of eight awards were handed over in a ceremony attended by Interior Minister Pascal Couchepin.

For the first time an award was also given for best screenplay. It went to Andrea Štaka's subtle portrait of three immigrant women from Balkan regions who meet in Switzerland. The film, Das Fräulein (The Waitress) won the Golden Leopard award at last year's Locarno film festival.

The 2007 winners of the prizes for lead and supporting actor went to two artists from the French-speaking part of Switzerland. Jean-Luc Bideau and Natacha Koutchoumov both played in Jean-Stéphane Bron's comedy Mon frère se marie (My brother is getting married).

The Swiss Film Prize is organised by the Federal Culture Office, in association with the Swiss Broadcasting Corporation, Swiss Films and the country's three main film festivals.

The awards are intended to promote the Swiss film industry.

The most successful Swiss films in 2006 were Grounding and Die Herbstzeitlosen (around 400,000 tickets sold each).

The most successful Swiss film ever is the 1978 comedy, Die Schweizermacher, with just under a million admissions.

The 42nd Solothurn Film Festival has opened and is offering the best of Swiss films, including Vitus, which just missed out on an Oscar ... 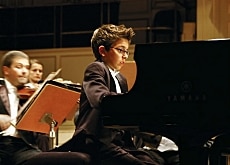 Swiss films have enjoyed a golden year, with 37 awards at international festivals and reaching a domestic market share of ten per cent for the ...