Sotheby’s have returned a document signed by the Protestant reformer John Calvin to the authorities of canton Geneva on Thursday. The payslip, which dates from 1553, is believed to have been stolen from the canton’s archives.

The document was handed over at a solemn ceremony in Geneva's town hall, attended by representatives from the auction house and from international patrimonial experts.

The object was put up for sale at an auction on December 5 as part of a collectionexternal link of bibles belonging to the American theologian Charles Caldwell Ryrie, who died in February 2016.

Alerted by an expert, the archivist of canton Geneva could confirm that the manuscript was missing from the archives and its sale was annulled by Sotheby’s.

After a series of negotiations, the owners agreed to sell it to Geneva for an undisclosed sum. According to the Tribune de Genève paper, two donors contributed the amount.

The city is celebrating the 100th birthday of the Reformation Wall in Geneva, which features statues of leading Reformation figures such as John ... 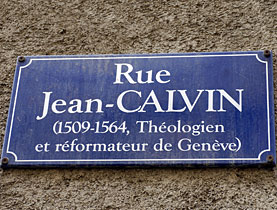 "Banking secrecy has its roots in Calvinism"

A prestigious Swiss auction house for fine arts and antiques is closing its doors to the public after 110 years. Galerie Fischer in the city of ...