Investors will continue to flock to the safe haven franc despite the Swiss National Bank (SNB) ditching its defence of the currency last week. That is the view of a range of experts at the World Economic Forum (WEF) in Davos.

One panel discussion posed the question: ‘Is there now such a thing as a safe haven?’ Swiss exporters and the tourist industry would be dismayed to hear that the answer is a qualified yes. Investors will always seek traditional areas of safety in times of stress, but current levels of volatility demonstrate that every haven has its breaking point.

The SNB’s policy u-turn was a case in point. Switzerland’s central bank could theoretically have continued defending the franc forever, but eventually had to concede that its CHF1.20 exchange rate ceiling with the euro was unsustainable. Political pressure at home, combined with Russian wobbles, sinking oil prices and the threat of European Central Bank quantitative easing created the perfect storm that forced the SNB to abandon its policy.

But investors continue to pile into the franc with deposits from commercial banks at the SNB rising to CHF402 billion last week from CHF388.7 billion the week before. This was despite the SNB announcing imminent negative interest rates last month and ending its euro ceiling last Thursday.

One person with a bird’s eye view of the action is David Puth, chief executive of CLS Group that handles some $5 trillion of forex trades a day. That volume doubled on the day the SNB dropped its defence of the franc.

“We put through record volumes of two and a quarter million transactions that totaled $9.2 trillion of currency payments that were seamlessly settled in about 45 minutes,” Puth told swissinfo.ch. Around half of the transactions involved the franc, Puth added.

The franc appreciated by around 30% against the euro in a matter of hours, but has since settled to just over parity with the single currency. Puth, a former JP Morgan executive and forex trader, does not think investors will be put off by the volatility of the normally staid franc.

“The SNB tried everything it could do to deter people from investing in its currency, but it just hasn’t worked,” he said. “The world is a volatile place right now. Interest rates are coming down everywhere and there is a deflationary pressure in most of the developed world. I think people will continue to view Switzerland as a place to invest because there aren’t a great deal of other choices.”

Economic historian Tobias Straumann, of the University of Zurich, agrees that Switzerland will continue to be a victim of its own success, attracting unwanted volumes of investments when the chips are down.

“In 2007, economists believed that the safe haven effect had disappeared because the euro was so strong,” he told swissinfo.ch. “A year later, safe havens came back into vogue again.”

“Since 2011, the Swiss economy has not done particularly better than Sweden or Norway, but the markets have a historical tradition of moving to the franc when major currencies get into trouble. The markets are not entirely rational.”

The European Central Bank will start to buy European Union government bonds from this March until the end of September 2016, introducing hundreds of billions of new money into the eurozone.

It’s a €60 billion (CHF59.3 billion) a month plan that the ECB’s president, Mario Draghi , hopes will revitalise the flagging eurozone economy. The programme was unveiled at the WEF meeting in Davos on Thursday.

Risk-sharing will apply to only 20% of the asset purchases, something that Germany has expressed major concerns about due to the impact of potential losses on national central banks.

And Davos delegates hardly expect things to get a whole lot better for Switzerland because some central banks are abandoning measures to artificially boost economies (such as the US Federal Reserve) while others continue to spend (European Central Bank).

This will result in an “epoch of huge unexpected volatility”, according to Anthony Scaramucci, founder and managing director of US alternative investment firm Skybridge Capital.

Volatility will only reduce the effectiveness of traditional safe havens, like Switzerland, that will continue to attract investors in times of strife, according to David Puth. “Switzerland faced the problem of building up an amount of reserves that was just going to overwhelm the system and had no choice but to step away,” he told swissinfo.ch.

“I think it’s impossible for a medium-sized economy like Switzerland to be an effective safe haven in the current climate.” 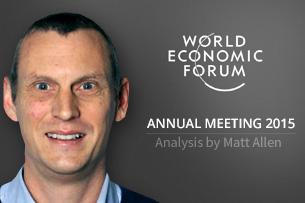 China‘s and Switzerland’s central banks have signed an agreement to make Zurich the newest hub for trading the renminbi currency (RMB).