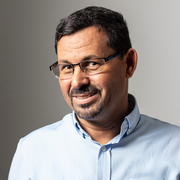 A multicultural society is often a multi-religious one. How can Switzerland best manage its growing diversity and the frictions which can arise? We speak with a legal specialist about religious recognition.

Religious diversity is on the rise in Switzerland, presenting society and the state with considerable challenges—both legal and social. swissinfo.ch spoke to Stefanie Kurt, who holds a PhD in law and is currently a postdoctoral researcher with the “On the move” project of the National Centres of Competence in Research in Neuchâtel, a project dedicated to exploring questions of migration and mobility.

For Kurt, “it is vital that religious communities are included in current debates, and that legal foundations take stock of the new reality”. Yet she laments the tendency to rather use the instruments of direct democracy to ban religious practices and symbols—a tendency which merely “stokes conflict and prevents the calming of passions”.

swissinfo.ch: In what way is the recognition of religious groups a topic of debate right now in Switzerland?

Stefanie Kurt: The religious landscape has transformed in Switzerland in recent years. National churches have been shedding members, and at the same time there has been a big increase in the membership of other religious communities. These are not recognised, yet clearly visible in society; lawmakers must therefore find a way to build a framework for the new diversity.

Certain cantons are currently modifying their laws—Neuchâtel, for instance—while others are starting to realise that it’s important to develop a legal framework which can leave the door open for the future recognition of new religious groups.

That said, the issue as such is not new in Switzerland. Basel City, for example, has already changed its constitution to be more open to other communities; Vaud has also adapted its constitutional laws in recent years. This has not been appreciated by certain members of the Swiss People’s Party [conservative right], who have launched a popular initiative in the canton “against religious fundamentalism”. The initiative aims to prevent religious communities—even if they are officially recognised—“asking for concessions or exemptions motivated or encouraged by religious belief or practice.”

swissinfo.ch: So the act of recognition is a cantonal affair—but should cantonal practices conform to federal law?

S.K.: The federal constitution accords to the cantons the competence to regulate their relations with religion, but they still must respect certain fundamental principles: human rights, religious freedom, equality before the law, the banning of religious discrimination.

Beyond this, however, cantons can choose the most suitable form to regulate their relations with religious communities. We can see, notably, a recognition in public law in Neuchâtel and Vaud; ‘minor recognition’ [see note below] in Basel City; and of course some areas where there is no legal possibility of recognition, in the cantons of central and eastern Switzerland for example (Appenzell Inner Rhoden, Thurgau, Schwyz, Uri, Zug, etc.).

In 2015, Austria modified its laws concerning Islam, according it a larger recognition. This despite the fact that relations between the state and Islamic communities had long been established, due to the historical context of the country.

According to Stefanie Kurt, “the Austrian solution could be quite inspiring for other states: a law which regulates on one side the criteria for recognition, while on the other hand determining the rights and obligations which go with it. It’s a similar idea to that put forward here in Neuchâtel.”

swissinfo.ch: What does it mean—on a day-to-day basis—for a community to be recognised?

S.K.: Recognition refers to a system of integration based on reciprocity: the state (in this case the canton) determines the criteria, conditions and procedures whereby a religious community can ask for recognition. In exchange, the community is granted certain privileges.

In the case of Neuchâtel, for example, the conditions outlined by the authorities include that the community is socially influential, that it respects confessional harmony and legal order, that it manages its finances in a transparent manner, and that it allows members to leave the group at any point.

swissinfo.ch: In a tense context of rapid religious change, how can we ensure the recognition procedure remains objective?

S.K.: That’s a difficult question, as we don’t have much experience with such recognition procedures apart from the national churches. Basel City has, at present, accorded recognition status to four communities: two Christian and two Alawite [strand of Shiite Islam]. These groups, visible in the canton for quite some time, are known for their engagement.

We will see how the situation develops in the coming years, especially since Muslim communities have begun the process, notably in Basel City, but also in Vaud.

But to return to the overall question, it’s clear that the administrative procedure leading to any legal recognition status should be based on objective criteria, in order to avoid any risk of discrimination.

Recognition in public law. The majority of cantons have constitutional or legal provisions that determine which religious communities are recognised by public law. These communities thus receive certain rights (religion classes in public schools, a confessional space in cemeteries, the construction of religious buildings, a chaplaincy service in prisons and hospitals, etc.) but are also bound by certain obligations.

Non-recognition. This implies the absence of any legal base that makes possible the recognition of any religious community apart from those already recognised.