The Swiss are more critical of their education system than a decade ago and expect reforms, according to a survey.

Costs, discipline and the cantonal school system are all areas which come under fire in the study, which was published on Thursday.

The results come as the Swiss prepare to vote later this month on a constitutional article calling on cantons to cooperate more closely on education and giving the federal authorities a bigger say in the running of the system.

Education is managed on a cantonal level in Switzerland, leading to 26 different school systems in the country.

The survey, which was carried out by Zurich's GfS Institute for the Univox research programme, found that approximately one in three Swiss still considers education and vocational training to be the country's "best investment for the future".

But the number of people who disagree with this statement has doubled since a similar poll in 1996.

The survey's authors say this is somewhat surprising since both politicians and the media have widely promoted this concept, but say that it is probably because citizens now consider education a less important issue.

However, there was widespread dissatisfaction with the present school system.

More than half of Swiss asked believe that schools turn out too many students who are not prepared for the real world and most Swiss (around 70 per cent) say there is not enough discipline in schools.

The cost of education is now considered too high by a majority of people.

In 1996 only 45 per cent thought too much was spent on schools, whereas today 58 per cent think the cantons are too generous. Only just over a third of those polled thought that more spending was needed.

The survey's authors say that is therefore unsurprising that many people believe the education system needs to be overhauled. Less than one in five who took part in the poll were happy with the current situation, versus a quarter of those polled a decade ago.

Around a third of those polled think schools will have to adapt, while 28 per cent consider more fundamental reforms will be needed and another 11 per cent believe that school system needs to be entirely rethought.

However, seven out of ten people feel that reforms will be difficult to carry out in schools, which they feel are too rigid to adapt to new conditions quickly.

The Swiss, especially the German-speakers, also want more flexibility from the school system.

Up to 70 per cent of respondents also believe that it would be impossible to coordinate the country's 26 cantonal education systems.

They do expect the federal government to set general educational guidelines, with about three quarters of those polled agreeing with this proposition.

While the Swiss have come out in favour of reform, they generally aren't prepared to go as far as promoting private schools as an alternative to the public system.

At best, only in four citizens supports private education, although this is more than in 1996, when 20 per cent of those polled said they were in favour of private institutions.

The Federal Constitution lays down the right to education and the obligation to attend school, but it is the cantons that are responsible for schooling.

This means there are currently 26 differing education systems in Switzerland.

Most pupils start school at the age of seven, after one or two years of nursery school. They usually stay in school for nine years before going on to higher education or training.

Overall, cantons are permitted to take their own independent decisions when it comes to the structure of their education systems, syllabuses and the dates of school holidays.

The OECD's Programme for International Student Assessment (Pisa) study measures 15-year-olds in different skill categories.
40 countries took part in the last study in 2003.
Switzerland came seventh in maths, 11th in reading, ninth in science and eighth in problem-solving.
However results vary from canton to canton according to a follow-up study. 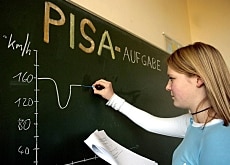 Education system could do better

The Swiss education and training system often outperforms its European counterparts but rarely finishes top of the class, according to a report. ... 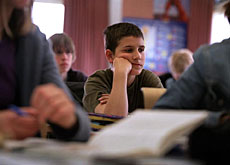 A supplementary examination of a 2003 international study has revealed significant differences between the cantons' education systems. ... 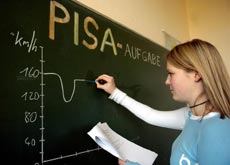 Swiss students have improved their rating in the latest Pisa test, which measures the skills of students in 29 OECD countries. In a report leaked ...