The world once marvelled at how the Swiss built the “Slide of Alpnach” to harvest pines from Mount Pilatus for European markets. Two centuries later, it's the hard lessons the Swiss learned from using too much wood that draw global notice.

Engineers in 1812 finished turning 25,000 pine trees into a wooden trough that formed a conveyor belt from the summit of Pilatus down to Alpnach. Pine trunks up to 30 metres long slid down it to the village on the Lake Lucerne shore, from where the logs were floated down rivers and on to the sea.

The tower looks out at Switzerland’s largest moor landscape, sprawling across 130 square kilometres, an area slightly bigger than Lake Lucerne. The Glaubenberg moorlandexternal link between Entlebuch and Sarnersee is badly damaged by past use but is now managed under the strictest land protection laws.

“It has the highest protection of all landscapes in Switzerland,” said the nation’s top forestry official, Rolf Manser, referring to the approval of the Rothenthurm Initiative in 1987 that led to the protection of moorlands and mire biotopes – small areas of swampy ground – being enshrined in the constitution.

“With the protection status in Switzerland, I think we have solved our problem here, but I think it’s a good example of how you could do it elsewhere in Europe as well,” said Manser, head of the forest division of the Federal Office for the Environmentexternal link, on a tour of the moorland in November with his counterparts from around Europe.

Hundreds of top forest managers from around the world meet biannually in a joint session of two United Nations committeesexternal link. The gathering of the tribe drew government officials, academics and others to the mountain resort of Engelberg, where they exchanged ideas and research but also inspected nearby Swiss forests and moorland.

Officials from 39 countries agreed on the importance of building climate change into their national forest programmes, strategies and plans, and on the essential role that forests and “forest services” – their benefits to people – will play in the UN’s sustainable development goals for the next 15 years.

Eighty per cent of Europe’s forests are in Russia, and Russian boreal forests capture up to 600 million tons of carbon per year. But many of the biggest challenges facing Russian forests – such as climate change, illegal trade and boosting the capacity to process new wood products – are common throughout Europe, said Alexander Panfilov, deputy head of Russia’s Federal Forestry Agencyexternal link.

“The issue is not the size of the country. The issue for sustainable forest management is to be able to allocate and manage resources in the correct way,” Panfilov told swissinfo.ch, comparing forestry in Switzerland and Russia, where 40% of the forests are alpine. “We consider that the role of forests for climate balance of the planet is underestimated. And we have pointed this out at the joint session in Engelberg.”

European foresters “realised it is important to cooperate” and talked about how to improve on that, according to Rob Busink, a senior policy adviser for The Netherlands economic ministryexternal link. “There is no one law for European forests, also not for the European Union. Every country has its own forest laws,” he said. “In every country, we have a different definition of forest.”

It’s also true that no one approach to forestry works for everyone because of wide variations in the characteristics, size and density of Europe’s forests. The main challenges are to deal with climate change and to help establish the EU as a “green economy”, said Busink.

“We need to use more timber to replace non-sustainable raw materials like concrete and steel, but that means the need for more timber will put a greater pressure on the European forest,” he said. “Knowing the way they work, I think other countries can learn from the Swiss.”

In the Glaubenberg moorland, building new homes or roads is now forbidden under Swiss law. Traditional uses like logging and grazing are still allowed.

That is because foresters believe that rather than let nature run its course, enough pines and firs must be harvested to prevent a build-up of undergrowth that leads to fires and disease. The area is anything but pristine – a mishmash of existing roads, homes, trails, fences and tree stumps crisscross it.

It poses a dilemma for federal and canton Obwaldenexternal link forest managers, because the treatment might require cutting down and burning the afflicted trees – and no one is too eager to do that.

The Swiss now manage for biodiversityexternal link, which means trying to consider the needs of all types of life and variation of species found within a certain area. The approach is gaining in popularity in Europe and elsewhere and comes from an accumulation of hard-won lessons.

After some important losses of forest habitat and wildlife, the Swiss passed federal laws in the second half of the 19th century to protect forests, impose wildlife sanctuaries, restrict hunting periods and appoint game wardens. That led to recovery of forests and game, but there were more losses from agriculture and water engineering.

A 1986 law included a fundamental shift away from protection of “beneficial” animals and species to emphasise conservation of species and habitats. In 2012, the cabinet approved a new strategy to maintain resilience of biodiversity and “ecosystem services”, those that contribute to our quality of life.

“In Switzerland, we were not always conscious of this. Our ancestors consumed too much wood, and the many goats owned by poor people ate much of the young trees,” Environment Minister Doris Leuthard told the forest conference.

“Wood from Swiss forests was floated to Rotterdam for city and boat construction,” she said. “This contributed significantly to the serious problems we had 150 years ago: water and debris from alpine valleys such as here in Engelberg caused flooding that extended far into the flatlands and cities.”

The new Swiss strategy on biodiversity has three major principles, said Reinhard Schnidrig, head of the Federal Office for the Environment’s wildlife and forest biodiversity section. They are that conservation and use of natural resources are bound together, he said, while decisions must be knowledge-based and pragmatic solutions are better than waiting. The principles are also exported.

Swiss experts at the University of Bern, for example, are helping Macedonia’s Saints Cyril and Methodius University of Skopje to “mainstream” the biodiversity approach, said Cvetan Nikolovski, who coordinates the project known as the Nature Conservation Programme in Macedonia, which is financed by the Swiss Agency for Development and Cooperation.

“They are managing their forests in a very sustainable way, which is not the case in Macedonia,” he said of the Swiss during a tour of the moorland. Macedonian forests, dominated by oak and beech, are mostly government owned. The ex-Yugoslav republic is a candidate to join the EU, and a precondition is to meet the EU “Natura 2000” requirements for protecting biodiversity.

Nikolovski said the project hopes to change the academic curriculum, eventually improve government conservation practices and “raise awareness of students – the next generation of foresters”.

The value of forests Who should pay to maintain Swiss woods?

Swiss forests have a lot to offer: they help to reduce the amount of carbon dioxide in the air as well as being a place to relax and a source of ...

With only 6.5% of its land set aside as protected area, Switzerland occupies last place out of 38 European countries in the latest State of the ...

After a year devoted to biodiversity, the United Nations has turned its attention to forests. In Switzerland, trees cover more than 30 per cent of ...

Mountain railways are feeling the pressure to boost their business by taking more tourists to the top of Swiss peaks, and faster than they used to.

By Jo Fahy, in Grindelwald 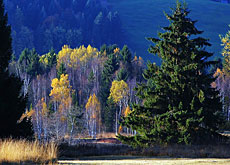 Two decades after getting a surprise thumbs up at the ballot box, an initiative to protect Switzerland’s wetlands has received a mixed review. ...