But what does that say about us? Between unbridled fear and bottomless love, our attitudes toward animals appear to be as diverse as they are conflicting. The perception of our own roles in the natural world could be shifting, too.

A team of Geneva University sociologists has studied animals that have made headlines since 1978 in Switzerland to see how we relate to our furry friends. The findings were made public this week.

"It certainly says a lot about humans and their relation to the environment," said Claudine Burton-Jeangros, a lead researcher on the study. "Thirty years ago we were more into mastering the environment. Now we're going back to a less dominating aspect."

The SFr350,000 ($325,750) study, called "From nice pet to the menacing other – Human, animal relationships up close," was funded by Switzerland's Federal Veterinary Office in an effort to help officials understand society's attitudes towards animals and how they are used in the media.

As part of that mission, researchers also surveyed the population to see how stories in the media can influence the perception of issues that directly or indirectly involve animals, such as with the recent slaughter of hundreds of thousands of pigs after the outbreak of swine flu.

To conduct the study, Jeangros and sociologist Annik Dubied spent 18 months pouring over newspapers like the tabloids Blick and Le Matin published between 1978 and 2007 and distributed in all language regions of the country.

The team randomly culled one week of articles per year from 15 periodicals and looked at television news broadcasts as well.

They also selected specific weeks when stories such as the outbreak of mad-cow disease or bird flu grabbed headlines to study how those topics were treated. The group did not look at stories where animals were used as metaphors or mascots, such as in reports about the Zurich football team, the Grasshoppers.

The first thing they noticed: animal stories appear to be getting more popular. From 1978 to1988, the sociologists found on average 128 stories per week that touched on animal topics. From 1997 to 2007 the stories increased to 187 a week on average.

A high point came in 2006 when the team collected 321 articles, many about the outbreak of avian flu. In 1986 they found just 56 articles on animals, largely within the context of fallout from the Chernobyl nuclear disaster.

The scientists said they were unable to determine whether those figures were proportional to the total number of articles printed during those years because that information is not available.

Yet one thing they say remains clear: Humans are moving away from a tendency to see animals as creatures dominated by society. Instead, people now see animals more frequently as part of a more "pure" or "natural" world that needs protection.

"Even with stories about dangerous animals we see how the discussion quickly focuses on animal protection and how humans can take a more ecological approach toward living together," Jeangros said.

"There is more awareness about the mixing of the worlds and that it is linked to this broader ecological perspective."

The shift appears to have taken place sometime around 1990.

"Before 1990, the animal is shown as a socialised creature integrated into the human community," the study states. "After 1990 we see the inverse. We describe them as pure beings, perfectly natural."

Of the 4,244 articles and 236 television broadcasts, about 36 per cent of the animal stories involved "undesirable" elements, such as when a young child was mauled to death by three pit bulls or when chicken meat was contaminated with poisons in 1999.

On the flip side, 32 per cent of the articles and reports involved "celebrity" animals, such as the emotional story in 2007 of Knut the super-cute baby polar bear at the Berlin zoo, or last year Farasi, a baby hippo in Basel that caused a media whirlwind after people feared he might be ground into tiger food.

Another 19 per cent of the articles collected involved animal victim stories, such as when humans abuse them or a toxic spill kills fish. About 13 per cent of the stories touched on domesticated animals like livestock or pets.

Jeangros hopes the story will also help add to the debate on how media reports on animals affect people's perceptions. In June, the researchers will host three roundtable discussions in Bern to open debate on subjects such as "Hot Dogs – Why dangerous dogs became such a burning topic".

"Animals tend to bring out positive reactions or more problematic ones," Jeangros said. "We have a very ambiguous relationship with animals. It's sometimes contrasting, often contradictory, but never indifferent."

As a side note to the study, sociologists Claudine Burton-Jeangros and Annik Dubied looked at how the cow is portrayed in Switzerland.

"In a country of cheese known for green pastures, the cow would be expected on the front page – but no," the authors wrote. "Cows and other livestock occupy only a modest place in the body of collected articles and above all are covered mostly by local or agricultural media."

Farm animals seem to be interesting only when they present a threat to humans, such as with mad-cow disease, the study said. 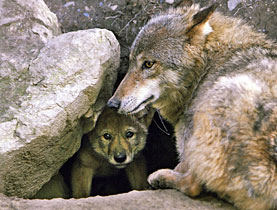 Wolves, which have returned to Switzerland after more than a century's absence, have had a bad press, especially over their attacks on sheep. But ... 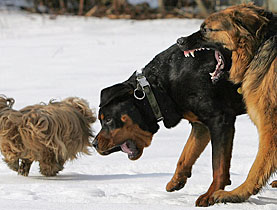 American pitbull terriers, Rottweilers and Dobermanns are the most dangerous dogs in Switzerland, according to statistics for 2007 released on ... 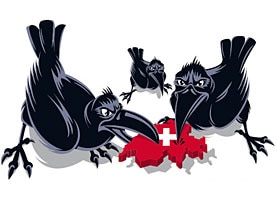 Exploiting the animals we love to hate

The rightwing Swiss People's Party has ruffled a lot of feathers with its campaign against allowing Bulgarians and Romanians to work freely in ... 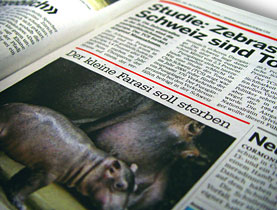 Surplus baby hippo could end up as animal food

A newborn hippopotamus named Farasi bounced into Swiss hearts and headlines earlier this month thanks to a series of cute photographs. But ...

Use and abuse of animals for political ends. Swiss political campaigners have a long history of using animals to get their message across. (Pictures: