Ospel, who was ousted from his job as chairman of UBS in 2008 after fallout from the US subprime mortgage crisis, passed away on Sunday due to cancer.

Born in Basel in 1950, Ospel began his career in 1977 with the Swiss Bank Corporation, an investment bank, before later engineering its merger with UBS in 1998.

Having become chairman in 2001, the beginning of his tenure was marked by the controversial grounding of the airline Swissair, with UBS criticized for playing a part in the airline’s collapse by refusing to extend it a line of credit. The bank was absolved of responsibility in a 2007 enquiry.

The end of his leadership period was brought about by another crisis much bigger than the bank itself: in 2007, the collapse of the US subprime mortgage market revealed huge liabilities in UBS’ portfolios, amounting to some CHF20 billion ($20.6 billion) in losses.

As a result of this, the bank was forced to raise almost CHF10 billion in new capital, and shareholders gave their backing to the Singaporean sovereign wealth fund taking a 10% stake in the bank. UBS also approached the Swiss government for help, and ended up transferring CHF39 billion in bad assets to the Swiss National Bank.

The crisis cost Ospel his job; he was replaced by Peter Kurer in April 2008.

Throughout his career, Ospel was also frequently scrutinized for his astronomical salary, which reached some CHF24 million in 2006, 300 times more than the average salary of a standard UBS worker. His decamping from Basel to the low-tax canton of Schwyz also didn’t help his public image. 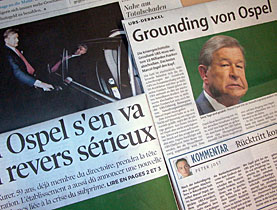 The press has welcomed the resignation of UBS chairman Marcel Ospel, saying the move was overdue. But doubts remain over the future of ...

The collapse of Swissair was more harmful to the country's biggest bank, UBS, than the September 11 attacks in the United States, the UBS chairman ... 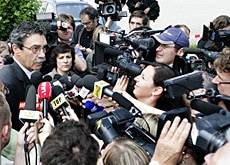 There has been harsh criticism of a decision by a court near Zurich on Thursday to acquit all 19 former Swissair managers of criminal malpractice.

Marcel Ospel and Peter Kurer, formerly two of UBS bank’s top executives, will not face criminal charges in connection with a tax-evasion scandal ...