An American researcher at Zurich’s Federal Institute of Technology outlines his journey to political involvement ahead of the upcoming US presidential election. 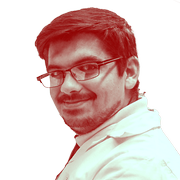 Americans abroad are voting in record numbers this election cycle. The nonpartisan website votefromabroad.orgExternal link just registered one million visitors – three times as many as in 2016. And several media reports point to people voting from abroad in "historic" and "record" numbers.

This record-setting engagement outside the US has made me reflect on why I got involved in US politics while living and working in Switzerland. While working towards my PhD in scientific research at the Federal Institute of Technology ETH Zurich, I have been appalled to watch US President Donald Trump’s attacks against scientific research in the United States. From denying climate change science to downplaying the current global pandemic, Trump and his administration have undermined the tireless work of scientific researchers. A firm belief in scientifically based policy led me to become a Democrat, but there was no guarantee I would grow up to be the staunch progressive I am today.

US elections: ‘Americans have the worst tax system in the world’

This content was published on Oct 3, 2020 Oct 3, 2020 An American living in Geneva explains what's driving his choice for US president in this year's contest.

I grew up under two Republican-leaning Catholic parents who were also card-carrying members of the National Rifle Association (NRA). We lived in a conservative part of Washington State where our Republican Congresswoman is now serving her eighth consecutive term. While I had voted in nearly every election since I was 18 years old, I was not very politically active until my family experienced difficult times. When my father lost his job in the wake of the last great recession, we were gravely affected.  I quit my university studies, moved back home, and started working at a local McDonalds. My family was no stranger to hard times, but this time it was more than just a temporary setback. This experience made me feel strongly about the role a government should play in society. A government’s priority should be to help those citizens who need it rather than bailing out the wealthy elite.

While a strong social welfare state is quite a normal policy in Europe, we cannot seem to have a rational discussion on how to attain a better welfare state in the United States. Once the 2016 presidential primaries came around, I recognized a candidate I could believe in who championed the rights of working-class people: Bernie Sanders. For the first time in my life, I volunteered for a political campaign, and since then, I have aimed to stay politically engaged.

US elections: ‘There’s less that divides us than we realise’

This content was published on Oct 3, 2020 Oct 3, 2020 An American living in Zurich shares how she's experiencing the US elections from abroad and choosing her candidate.

As a Native American, it’s important for me to support others in exercising their voting rights because Native rights continue to be trampled through long-standing voter suppression. In 2018, North Dakota lawmakers passed a controversial voter ID law which would no longer allow non-residential addresses on voter IDsExternal link. This law directly tried to suppress the vote among Native people who often lack a specific residential address when living on tribal lands. In a case before the Supreme Court, the Trump administration lobbied along with the State of Oklahoma to further diminish the tribal sovereignty of Indigenous peoples in OklahomaExternal link.

I also know that Indigenous communities and communities of color are often at the front lines of climate change. It is our communities that will be the first to feel its adverse effects. The current presidential administration has consistently jeopardized the wellbeing of Indigenous nations and sought to undermine the sovereignty of our tribes. Donald Trump signed an executive memorandum in his first month of office to expedite the completion of the Dakota Access Pipeline, a project opposed by the water protectors and land defenders of the Standing Rock Sioux tribe and Indigenous people throughout both the United States and the rest of the world.

Finally, during the global pandemic, the SARs-CoV2 virus has disproportionately affected Indigenous people, and other people of color where the mortality rate for Indigenous people is 3.1 times as high as it is for white peopleExternal link. Despite these profound challenges, there is still a great hope in Indian Country as a wave of young Indigenous leaders have mobilized and become more interconnected. I have volunteered at leadership conferences for native youth, and the future lies with this group of motivated individuals who are tackling problems of all shapes and sizes.

Is the time ripe for national referendums in the US?

This content was published on Oct 24, 2020 Oct 24, 2020 With the US presidential elections less than two weeks away, journalist Joe Mathews argues for a Swiss-style direct democracy system in the US.

While living in Switzerland, a country that so proudly celebrates democratic participation, I discovered the local Zurich chapter of Democrats Abroad. In our youth outreach team, we have helped US citizens exercise their right to vote from abroad. We have registered first time and new voters, answered questions, and helped people return their ballots on time. Carrying out our activities during a global pandemic has made efforts to get out the vote extremely complicated, but we have now hosted a mix of in-person and online events to get information about voting to United States citizens living in Switzerland.

From healthcare coverage and Indigenous rights to having a livable planet, there are so many issues at stake in this current election. If you are an American citizen living abroad, I implore you to vote. If you know any citizens of the United States, please encourage them to vote in this election. Voting is only the first step towards creating a more just future, but it is the most important one right now. If you have already voted, I encourage you to remain politically active in an organization like Democrats Abroad even when it’s not an election year. My experience has shown me that speaking up and staying involved is always worth it.