Introducing paternity leave while the economy languishes in its worst recession since 1975 would be irresponsible, says Michele Moor. The Swiss People’s Party politician from Ticino wants a no vote on September 27. 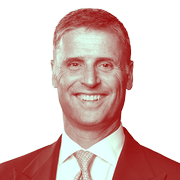 Michele Moor, co-president of the referendum committee against paternity leave

At a time of severe economic crisis, it would be misguided to introduce a costly and superfluous system of paternity leave. This is the umpteenth attempt by the centre-left to increase social benefits, and it aims to destroy the Christian model of society which has made Switzerland the most prosperous nation in the world. Thanks largely to a natural and responsible division of labour between men and women, this country has created the conditions to achieve and maintain a level of prosperity that is the envy of others.

Paternity leave would not add to the equality of the sexes, not least because there are laws of nature which simply must be accepted: men and woman have different roles when it comes to conceiving and rearing children, especially in the first months of life. A newborn sleeps 16-18 hours a day, and when it is awake it usually needs its mother. The father may be of help, but it is hard to see why he cannot do this using some holiday time – which could not be put to better use than in the first year of a child’s life.

Paternity leave: an important step towards a modern family policy

This content was published on Sep 9, 2020 Sep 9, 2020 A two-week paternity leave would give fathers equal rights and reduce the risk to mothers’ careers, says Senator Maya Graf of the Green Party

All this has nothing to do with the unacceptable disparity in pay between men and women, which will not disappear just because a state-supported paternity leave is introduced.

And according to classifications drawn up by various prestigious international institutions, Switzerland is an extremely caring society: due to prudent policies, it has the financial resources it needs to provide help to the greatest number of people possible.

More burdens for businesses and employees

Nevertheless, even with the ever-growing tax burden, many of our social institutions find themselves in a precarious situation, and until their funding can be safeguarded we cannot tolerate a further expansion of the welfare state. To increase the range of benefits at a time like this would be irresponsible.

Considering the likelihood of an increase in social welfare contributions, especially to ensure funding for the old-age pension system, we should not place further pressures on businesses and employees, beginning with the direct costs of paternity leave, which are estimated at CHF250 million a year ($277 million).

This would need to be funded by an increase in worker contributions; but the additional costs of hundreds of millions of francs would deal a fatal blow to the Swiss business marketplace.

Aside from direct costs, paternity leave would also give rise to even greater indirect costs, beginning with the absence of employees, which would be a heavy burden for businesses to bear, leading to a decline in productivity and profitability.

Paternity benefits to replace wage loss would cover 80% of income, up to a maximum of CHF196 a day. Businesses, required to pay full salary during the leave period, would themselves have to come up with the salary difference not covered, as well as ancillary wage costs. They would also have to find people to fill in for the absent staff members, paying them overtime.

Businesses would in fact be dealing with several types of opportunity cost, starting with lost orders and decreased productivity. These indirect costs would come to something like two to four times the direct costs – so paternity leave could end up costing Switzerland CHF1 billion per year.

Urgent to concentrate on priorities

Switzerland is going through its worst recession since 1975. To expect a rapid return to pre-crisis growth levels would be utopian. Production has dropped markedly, unemployment is rising, a million workers are on short-time working hours, and debt in the public sector – which will have to be paid back sooner or later – had increased hugely.

Therefore, we actually need to be thinking about drastic austerity measures.

The consequences of this crisis will only be seen by businesses and employees in the coming months, or maybe years. Now it’s necessary to focus on the essentials: revitalising the economy, reforming social institutions in financial difficulty, and lowering debt levels.

Faced with this scenario, we need to be prepared to give up, or at the very least postpone, all projects which fall in the “nice to have” basket – including paternity leave.

Translated from Italian by Terence MacNamee