Woolly Mangalica pig, Rhaetian Grey cattle, honey apple and Chézard plum – these are names you rarely hear these days, unless you walk into the Ferme des sens, a farm which conserves rare species. 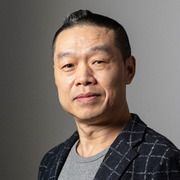 The Ferme des sensExternal link is situated in the village of Châtel-St-Denis, in canton Fribourg, in the French-speaking part of Switzerland.

Owner Stéphane was born in the 1970s. His farm is not only organic and run on the small-scale model, but almost all of his fruit, vegetables, poultry and livestock are on the list of Swiss endangered species.

It’s 5am and the moonlight is still shining across the fields. Stéphane is working. He walks into the animal pen with his farm tools. His typical work day starts with the sound of the milking machine breaking the early morning silence.

The goats in the pen are Appenzell goats, one of the ancient indigenous Swiss breeds on the endangered list. Only a few breeders remain.

From an economic point of view, it makes less sense to keep Appenzell goats than faster-growing modern goats. But their resilience, robust body and great milk production are particularly suited to the mountain areas of Switzerland.

Appenzell goats are also pure white with medium-length hair. It’s an image that has represented indigenous goats in traditional Swiss painting for centuries. They have a special historical and cultural significance.

After milking the goats, Stéphane’s first farming tasks of the day are completed. The countryside gradually comes to life and the sun starts to rise. On weekdays, Stéphane drives his son to school in town, then returns to the farm, leads the goats to the hillside for grazing and releases his nine Rhaetian Grey cattle to graze the pasture.

This content was published on Sep 20, 2018 Sep 20, 2018 Stéphane starts working on the farm every day at 5am. After milking, it's time to feed the goats and pigs and take the cattle to pasture...

These cattle, also an endangered breed, are very eye-catching. Unlike most Alpine cows, Rhaetian Greys do not have large patches of colour. Their grey, monochrome coats look inky – and when a group of them is moving along the green hillside, the effect is quite amazing.

They, too, bring fewer economic benefits: the cattle are smaller than other more “cosmopolitan” breeds, like the Asian Zebuine. However, Rhaetian Greys are cheaper to feed, being happy with lower-quality grass or hay.

This in turn can increase the economic value of some mountain grasses. The cattle are also well suited to the steep mountain pastures thanks to their low weight and relatively large hooves.

Unlike most modern breeds, many endangered species are ancient in origin, smaller and have a naturally evolved genetic makeup. As a consequence, their growth cycle is slightly longer than modern breeds and meat production is often lower. This is why many ancient breeds have become unpopular and some have even died out.

These ancient breeds also have a lot of advantages: they have more stable genetic characteristics, can adapt more readily to their environment and climate and are more resistant to illness. They can thrive on lower-quality grass or hay. This has ensured that the breeds have survived over the centuries.

But modern, profit-oriented farming pushes high production over the advantages of these ancient breeds. This has speeded up the breeds’ extinction rate and decreased the genetic diversity in livestock populations.

Lack of genetic diversity means more inbred and homogenous farm animal populations which are less able to react to external risks, like disease.

This has been happening worldwide for 200 years, since the industrialisation of farming began. And there has also been an impact on sustainable development and biodiversity. This is why the work of the non-profit Pro Specie Rara Foundation, which aims to protect these endangered species, is so important.

Pro Specie Rara is a Swiss non-profit foundation. It was founded in 1982 with the aim of preserving livestock breeds and crop plants threatened with extinction.

Over the decades, Pro Specie Rara has become a leading organisation in its field and works closely with the relevant associations, livestock farmers and breeders. It counts around 3,000 private individuals and institutions as members. It also relies on a large number of donors to continue its work.

The organisation says many indigenous species have been saved from extinction. Its work is nationally and internationally recognised and is considered to be pioneering.

Stéphane is one of the roughly 3,000 individuals and institutions that are members of Pro Specie Rara. He took over the almost abandoned farm from his grandfather seven years ago and started cultivating the fallow fields and repairing the farm buildings. He also started to breed endangered Pro Specie Rara animals and plants. In addition, he set up wildlife areas to encourage butterflies and spiders to thrive. For this, Stéphane receives money, mainly from the government but also from the canton.

The woolly pig is smaller than the common white pig – and they look quite cute with their sheep-like coat. Their meat is not as lean as pink pigs’ meat, but they have a better tolerance to cold.

This means they can be outside for longer, which in turn checks the growth of certain plants in the surrounding environment – leading to a more ecologically balanced and protected landscape.

Milking, feeding, mowing, farming and managing – a farmer’s life is tougher than the urban one. And because he keeps to organic farm standards and has lower-yielding livestock, Stéphane has to work more as well. But he still enjoys it and has never regretted having the farm.

As he is well aware of the relationship between biodiversity and sustainable agriculture, he is not afraid of things taking longer in the short-term and does not complain about the low yields.

He believes that only by protecting and breeding these rare species can the loss of genetic resources be avoided and their survival assured.

But as the farm does not produce enough income for his family’s needs, Stéphane works in a home for mentally handicapped people in the afternoons. And there’s now a special connection between the two seemingly unrelated workplaces, as Stéphane regularly invites the home’s inhabitants to his farm, where they can help out with activities and enjoy being close to nature.

For example, the farm shop is open every Friday afternoon, selling organic products from Stéphane’s own farm and nearby farms. Once the lettuces have arrived in a wooden box, Stéphane shows his charges step by step how to pack the them into paper bags.

Even after just one short visit to the farm, you get a strong sense of its owner’s love of nature, the environment and fellow humans.

Stéphane’s farm shop looks very bare compared with city shops with all their fancy decorations and lights. This makes the colour film poster hanging on the wall all the more conspicuous.

It’s for the film Silent RevolutionExternal link, which is about humanity and farming the land. In the poster, a farmer smiles in a wheat field. There is quote from French farmer and activist Pierre Rabhi in the top right corner: “The true revolution is the one that leads us to transform ourselves to transform the world.”