Swiss referee Urs Meier has been placed under police protection after receiving death threats in the wake of England’s exit from the European football championships.

Meier, who controversially denied England a 90th-minute goal, told swissinfo he had also been advised by police to go into hiding for a few days.

Meier has been vilified and hounded by the English tabloid press since last Thursday’s quarter-final against Portugal, which England eventually lost 6-5 on penalties.

Reporters from “The Sun” newspaper tracked down Meier's family and placed a huge English flag in a field outside his home in northern Switzerland, publishing photos of the exploit.

Meier has received more than 16,000 emails – some threatening – after newspapers listed his internet address.

Urs Meier: I had a wonderful Euro [2004] with three fantastic games, and I’m feeling good about that. But on the other hand the problem with the English newspapers, especially with The Sun, is really a big shock for me here in Switzerland.

swissinfo: Is it true you’ve been offered police protection and advised to leave the country for a few days?

U.M.: I have police here now and I’m taking these threats very seriously. But I’ve not been advised to leave the country, merely to go somewhere where no one knows me.

swissinfo: Are you concerned for the safety of your family and the people who work for you?

U.M.: I hope that the whole reaction is against me and not against other people in my family or in my company. And I hope that after the Euro everything will return to normal, that people will forget and that I will get my private life back.

swissinfo: What’s your reaction to the media campaign against you?

U.M.: I’m absolutely shocked by what’s gone on and the attacks from The Sun, the supporters and the other newspapers. I’m really shocked because the decision was 100 per cent correct and the whole world saw this decision was correct.

I was always of the opinion that the spirit of fair play in England was really important, with respect for officials. I never expected this reaction.

swissinfo: How do you feel about England and the English now, especially newspapers like The Sun?

U.M.: In general, I very much like the football and the people in England. I spent four weeks there last year and I know there are different people there. But some supporters are now really overheated, and it’s not right that a newspaper like The Sun should invade the private life of a person in this way.

I have also been quoted as saying that the decision was not correct. I never said anything like this to a newspaper because the decision was 100 per cent correct. That was also a new experience for me - that they should write something that wasn’t true.

swissinfo: This was your last European championship match as a referee. It must leave you with a sour taste in your mouth?

For the moment yes, because I think it was one of the best games that I have ever refereed. It was a fantastic game, a really interesting game - the best game in this Euro.

I had a good feeling after this game, I have a good feeling now and I’m sure that all the players and all the coaches – also from England – are happy about the refereeing in this game. But for the moment it’s not easy with this tabloid.

Meier disallowed an England goal in the 90th minute of the Euro 2004 quarter-final against Portugal after spotting a foul on the Portuguese goalkeeper.

English tabloids have accused Meier of “robbing” their team of victory.

He is now being protected by police after receiving death threats, and he has been advised to go into hiding for a few days. 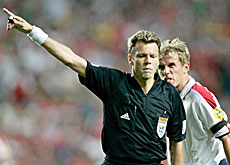 Swiss referee Urs Meier has been accused of “robbing” England of a quarter-final victory at the 2004 European football championships. England ...