While the Church of Scientology could be dissolved in France if its members are convicted at trial in Paris, the religious movement raises few eyebrows in Switzerland.

Unlike other religions, like Islam, which is facing a rightwing-backed popular initiative to ban minarets, Scientology and its one thousand Swiss followers hardly cause a stir.

"After the September 11 attacks in New York the discussions and fears raised by sects in Switzerland were replaced by those about the Muslim faith," he explained.

Things were looking rather different for the Church of Scientology at the end of the 1990s, however.

Canton Basel-City banned the movement from using aggressive selling methods in public to sell its courses to potential new members. The group took the issue to the Federal Court, which decided that its religious freedom had not been violated by the cantonal ban.

At the time Switzerland was still in a state of shock over the killings of 74 members of the Order of the Solar Temple doomsday cult in Quebec, Canada, Switzerland and France between 1994 and 1997.

The Swiss parliament therefore moved to try to clamp down on sects and in 1999 a House of Representatives commission asked the government to come up with a strategy on sects.

"But the government refused, arguing that such a policy was not necessary. In its answer it stressed the fact that research into sects was something for the academic world," said Pahud de Mortanges.

The federal government did not want to challenge its neutral stance over religious groups and its limited control over the issue, which is usually in the hands of the cantons, he added.

Yet Switzerland has measures in place to guard against any cult excesses.

"Under current legislation it is perfectly possible to combat any kind of abuses. But a sect member has to lodge a formal complaint. Their families cannot do it in their place. Movements like Scientology can therefore represent a danger, especially for their members," said Pahud de Mortanges.

"To fill their courses, Scientologists act like 1950s-style insurance salespeople, using pressure so that you buy others. As the courses are expensive, Scientology offers the option of working in its centres to gain reductions. In this way you are really in the organisation's clutches," he explained.

"With these kind of movements we [outsiders] always have the choice. But if you've lived in such a group for years, all your friends are there and you've invested money and time in training, it's very hard to get out."

But the movement, which was founded in 1954 by science fiction writer L. Ron Hubbard, seems to be suffering a similar fate to other new religious groups.

"Scientology is a very new movement which corresponds to modern western concerns. It offers a very individual quest for success, performance and personal improvement. But its legal troubles have put the brakes on its ambitions," said Stolz.

"Very often these spiritual movements start in a very lively manner and society sees them as odd and unacceptable. When it started out the Salvation Army was considered the worst of all sects."

Over the years most of these movements tend to become more normal and realise that they have to make compromises with the rest of society if they want to survive, he added.

Francine Bielawski, spokeswoman for the Church of Scientology in French-speaking Switzerland, insisted that this normalisation process had taken place within the movement.

"After recent trials we have adopted very strict rules for our members who may be overzealous," she told swissinfo.

"In countries where we have been recognised as a religion, our financial accounts have been gone through with a fine tooth comb. In Germany we were investigated for 12 years before they concluded that there was nothing to reproach us with and we were of public benefit."

But Pahud de Mortanges recalled that the movement was still under surveillance by the German authorities.

"After the trials in the 1990s the Scientologists realised that they had to change their attitude, especially as they were losing members," he added.

Stolz said there had been changes but it was hard to know how deep they went.

"In the US, researchers say Scientology is slowly becoming a respectable movement. In Switzerland they seem to be going in the same direction. But this trend, if it's real, is very slow," he said.

Yet they still have some odd convictions, said Stolz.

"Scientologists still have a phobia of psychiatrists," he declared.

"They believe this profession hides a secret organisation, which is the incarnation of absolute evil. This is very strange and it's hard to imagine a potentially respectable organisation holding such views."

Scientology enjoys no such legal protection in France and has faced repeated accusations of being a moneymaking cult. In Switzerland it is tolerated as a religious sect.

Scientology says it has gone to court in many countries to uphold the right to freedom of religion.

Scientology in France on trial

The Church of Scientology's French branch went on trial on May 25 on charges of organised fraud.

The group's Paris headquarters and bookshop are defendants in the case. If found guilty, they could be fined €5 million euros (SFr7.5 million) and ordered to cease their activities.

The French trial centres on complaints by former Scientology members who say they were cajoled into spending up to hundreds and thousands of euros on personality tests, vitamin cures, sauna sessions and counselling with an "e-meter".

Scientology members usually undergo personality tests and a form of counselling called "auditing". In an auditing session, the counsellor, known as the "auditor", locates spiritual problems of the patient, known as the "preclear", through questions and the use of an "e-meter", Scientology says on its website.

French investigators have described the e-meter as useless. Scientology says it is a religious artefact used in a procedure that addresses spiritual problems and leads to greater happiness.

On its website, Scientology justifies the cost of its sessions by saying they could be compared with courses in a school or university. It says the "auditing" sessions help members reach levels on which they are "literally seeking immortality, which is priceless". 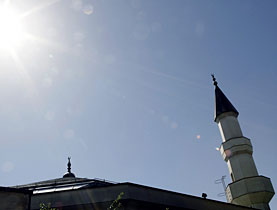 The House of Representatives has come out against a proposal by rightwing political parties to ban minarets. A majority also rejected calls by ... 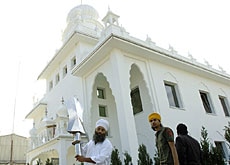 Some religions are more welcome than others

If you're a Sikh, Hindu or Buddhist in Switzerland and want to build a temple, no problem; if you're a Muslim and want to put up a minaret, you'd ...