A new study says preserving ancient breeds of cows in Switzerland could help provide a future source of meat and milk as global warming kicks in. (Julie Hunt, swissinfo.ch)

A recently published research project chaired by the Swiss Federal Institute of Technology Lausanne (EPFL), points out that, due to climate change, Switzerland and other Alpine countries are expected to face more severe conditions than surrounding lowland countries – and old Swiss breeds of cattle like the Evolène from canton Valais, are better adapted to the challenges.

At the end of the 19th century, the canton of Valais decided to focus efforts on breeding entirely brown cows. As the number of Evolènes, with their white flecks, declined, the closely-related Eringers became more popular. ProSpecieRaraexternal link, the Swiss foundation for the cultural and genetic diversity of plants and animals, helped to save the Evolènes from extinction.

Breeders’ associations were set up and herd books started with the genetic details of all new calves born. Breeders use the information so that mating pairs are as distantly related as possible, thus avoiding the risk of inbreeding, and increasing the chances of expanding the stock. There are now about 400 to 450 Evolènes in Switzerland.

The horned cows are small and they produce large quantities of milk in relation to their body size. They are robust and less likely to catch infections than common breeds, as well as being extremely strong and well suited to wild summer grazing pastures in the Alps. Adrienne Stettler has 20 Evolènes on her farm in Utzigen, canton Bern. swissinfo.chexternal link went to find out why she decided to keep the ancient breed. 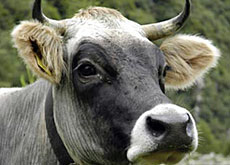 The Swiss resort of Interlaken hosts two separate meetings of experts and farmers over the next few days to discuss ways of preserving endangered ... 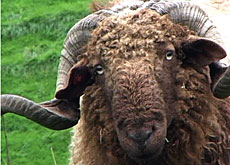 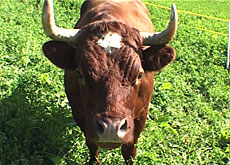 Evolèner cows return to the pasture

Like many breeders of endangered cattle, Gotti Fankhauser cannot live from farming alone - his day job is as a caretaker for the post office. ...